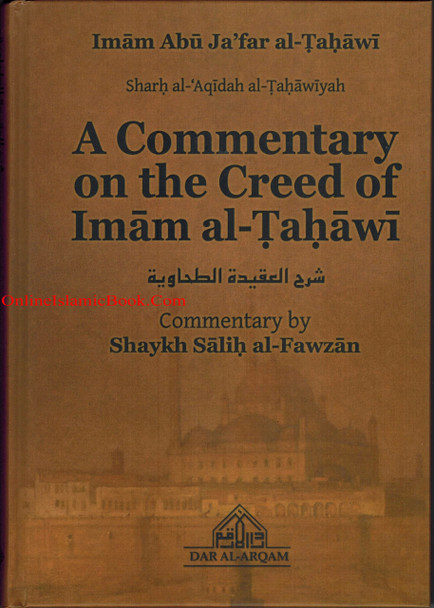 A commentary by Shaykh Salih al-Fawzan on al-Aqidah al-Tahawiyyah, the most widely acclaimed and accepted work on the creed of Ahlus Sunnah wal-Jama'ah.

Before you is the English translation of Sharh al-‘Aqidah al-Tahawiyah by Shaykh Salih al-Fawzan. This is an explanation of the renowned treatise on the Islamic creed entitled al-‘Aqidah al-Tahawiyah (The Creed of Imam al-Tahawi). The author of this treatise is Imam Abu Ja‘far al-Tahawi (239-321 A.H.), one of the leading authorities on the Hanafī madhab. The period Imam al-Tahawi lived in was the zenith of the dissemination of the Islamic sciences and he was just one of the giants that this era produced. To illustrate this: his teachers included Imām Isma’il ibn Yahya al-Muzani (a major student of Imām al-Shāfi‘ī), those he collected hadith from included Imām al-Nasai (author of ‘Sunan al-Nasai’, one of the ‘Sahih Sittah’) and his students included the great muhaddith Imām al-Tabarani.

The purpose of his treatise was to state the creed of the early scholars of the Hanafī madhab and to indicate its correlation with the views of Ahl al-Sunnah wa’l-Jamā‘ah in general. As Shaykh al-Fawzan states in his explanation: “This entails a refutation against those who associate themselves with the Hanafī school of fiqh in modern or recent times: They associate themselves with the Hanafī school but contradict Imam Abū Hanīfah in creed; rather they only follow his views in jurisprudence. They adopt the creed of those who profess kalām (theological dialectic) and the logicians.”

A Commentary On Zad Al-Mustaqni

MSRP:
Now: $79.95
Was:
This is a translation of volume 1 & 2 of Shaykh Salih al-Fawzan's excellent 3-part commentary on the classical guide to the Hanbali madhab entitled Zad al-Mustaqni'. It covers the Book of...
12298

The Fatwas of Imam Al Albani Regarding Fiqh, Creed & Transactions

MSRP:
Now: $14.95
Was:
The Fatwas Of Imam Al Albani Regarding Fiqh, Creed & Transactions In the name of Allah the Most Gracious the Most Merciful All praise & thanks are due to Allah, we seek His help & we seek...
11336

Commentary On The Aqeedah (Creed) Of At-Tahawi: Sharh Aqeedah At-tahawiya

MSRP:
Now: $59.95
Was:
The religion of Islam is characterized by and distinguished from all other religions by its many ordinances, rules and systems of life. The conceptthat comes in the forefront of...
13117

MSRP:
Now: $11.95
Was:
Sheikh-ul-Islam's book Al-Aqeedah-il-Wasitiyah deals with the perfect and undefiled Islamic Faith and Creed of the As-Salaf-As-Salih (the pious predecessors) particularly in regards to Allah's names...
10036

A Commentary On Zad Al-Mustaqni

MSRP:
Now: $79.95
Was:
This is a translation of volume 1 & 2 of Shaykh Salih al-Fawzan's excellent 3-part commentary on the classical guide to the Hanbali madhab entitled Zad al-Mustaqni'. It covers the Book of...
12298

MSRP:
Now: $12.95
Was:
The book that lies in front of you - dear reader - is a concise expression of sound ’aqeedah from one of its earliest sources. Sharhus-Sunnah was penned by the Noble Imaam Ismaaeel Ibn Yahyaa...
11894

A Commentary on the Poem al-Bayquniyyah

MSRP:
Now: $15.95
Was:
A commentary on the famous poem in the field of hadith sciences entitled al-Manzumah al-Bayquniyyah by Shaykh Muhammad ibn Saalih al-Uthaymeen (rahimullah). The Merits of the Poem of al-Bayqūnī:...
12269

MSRP:
Now: $7.95
Was:
What is the Muslim to do when he is constantly being faced with new challenges, being cornered by difficult trials and tests, and must tackle many issues coming from every angle, how does he remain...
10829