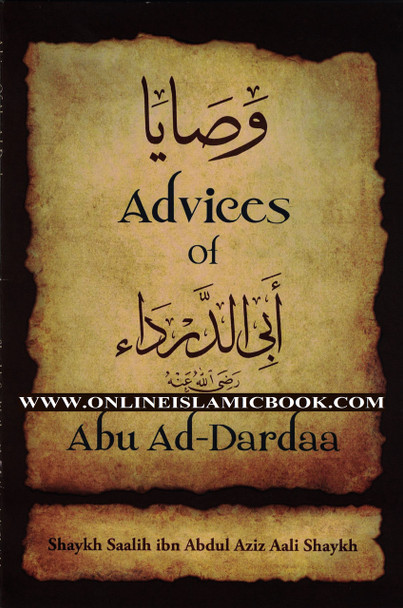 The name of Abu Ad-Dardaa Al-Ansaaree Al-Khazrajee was ’Uwaymir ibn Zayd ibn Qays, and it was also said that his name was ’Uwaymir bin ‘Aamir. He accepted Islam on the day of Badr, may Allaah be pleased with him, and participated in the battle of Uhud and the battles after that. ’Umar ibn Al-Khattaab, may Allaah be pleased with him, paid him a stipend of four hundred (of their currency) per month, because the companions were given stipends based on their precedence in Islam. ’Umar gave those who participated in the two battles of Badr four hundred per month and he included Abu Ad-Dardaa with those who participated in both battles of Badr.

Adh-Dhahabee said in his biography of Abu Ad-Dardaa,

“Abu Ad-Dardaa was an Imaam to be followed, the judge of Damascus, the wise man of this Ummah, and the best of the reciters of Damascus.”

Price:
Sale Price: $8.95
Was:
The Declaration of Faith By Shaykh Saalih ibn Fawzaan al-Fazwaan, Abu 'Aaliyah From the author's introduction: "Since this great declaration of laa ilaaha illallaah; that none has the right to be...
11823

Price:
Sale Price: $9.95
Was:
This Is Islam by Abu Iyaad Amjad Rafiq ISBN: 9781644673027 There are many shouts and screams-coming from a range of ideological backgrounds-competing for your ears, heart and mind in order to...
12696

Abu Lahab and his Wife Arwah By Shazia Nazlee

Price:
Sale Price: $5.95
Was:
Abu Lahab and his Wife Arwah By Shazia Nazlee ISBN: 9789960971551 This beautiful book for children about Surat Al-Masad explains about it's history and events related to the Prophet's evil...
11721