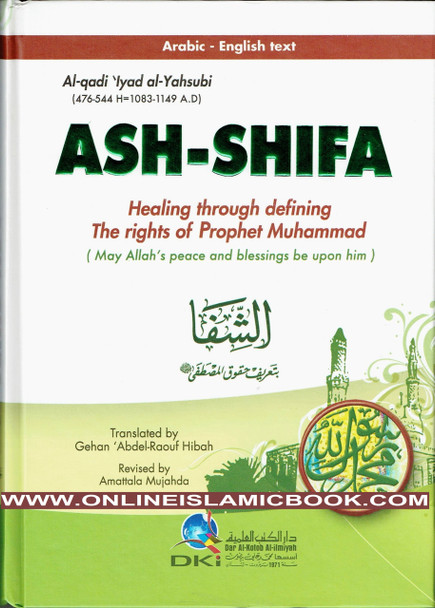 Kitab Ash-shifa bi Ta'rif Huquq al-Mustafa", (Healing by the recognition of the Rights of the Chosen one). This is a meticulous book, compiled by Al-Qadi Abul-Fadl Iyyad bin Musa bin Iyyad (d. 544H / 1149CE), comprising the incumbent duties which are due on a Muslim towards the Prophet. Perhaps the most frequently used and commented upon handbook in which Muhammad's life, qualities and miracles are described in every detail. Generally known by its short title, Ash-Shifa, this work was so highly admired throughout the Muslim world that it soon acquired a sanctity of its own for it is said: "If Ash-Shifa is found in a house, this house will not suffer any harm...when a sick person reads it or it is recited to him, Allah, will restore his health."

The Sunna of the Prophet By Muhammad al-Ghazali

The Purification of the Soul By Ibn Rajab al-Hanbali, Ibn al-Qayyim al-Jawziyya

Tazkiya: The Purification of Soul By Maulana Wahiduddin Khan

Price:
Sale Price: $5.95
Was:
Tazkiya: The Purification of Soul By Maulana Wahiduddin Khan ISBN: 9788178988177 Tazkiyah literally means purification. In the extended sense it means growth. In this respect, tazkiyah means...
12218

Selected Writings on the Purification of Soul By Dr. Muhammad Saeed Hawwa