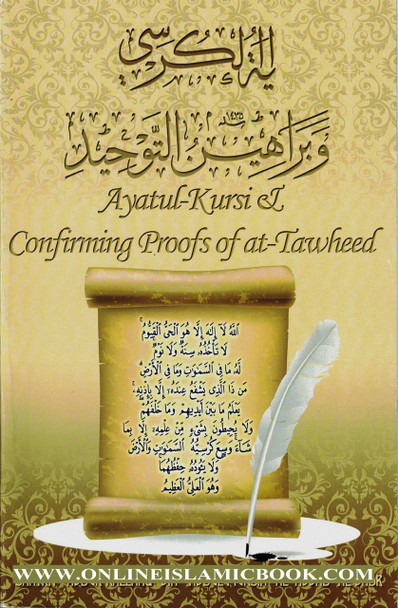 “Indeed Allah ordered me to teach you” He (i.e. Ubay) said, “Did Allah mention my name to you?” the Prophet said, “Allah mentioned your name to me” Anas bin Malik said, “Ubay began to weep.”

Likewise you should contemplate in order to grasp Ubay’s the full extent of understanding of the religion (radhiallahu ‘anhu); his response to this question wasn’t after long period of time like a week or a month in which he could review the verses and contemplate its meanings; rather he (radhiallahu ‘anhu) merely responded immediately after the Messenger (sallallahu ‘alayhi wa sallam) repeated the question; so he chose this blessed verse.

“This verse includes at-Tawheed as it relates to Allah’s divinity, lordship, and His names & attributes; in addition to that it includes the completeness of His dominion and what His knowledge encompasses, the vastness of His Power, Majesty, Greatness, Loftiness, and Exaltedness over all of His creation. This verse alone contains the ‘aqeedah as it relates to Allah’s Names and Attributes which comprises all of His most beautiful names and lofty attributes.” [1]

Ubay’s keenness (radhiallahu ‘anhu) in selecting this verse was profound and precise; and it demonstrates the great concern for at-Tawheed in the hearts of the companions. This is exactly what Al-Bukhari reported on the authority of ‘Ayesha (radhiallahu ‘anha) that the Prophet (sallallahu ‘alayhi wa sallam) dispatched a man over a raiding party. The man would to lead the prayer and would always conclude his recitation with Soorah Ikhlaas. So upon their return they mentioned that occurrence to the Prophet (sallallahu ‘alayhi wa sallam) and He said to them,

“ask him why does he do that” so when they asked him he replied, “because it (i.e., the Soorah) a description of Ar-Rahmaan and I love to recite it.” So the Prophet (sallallahu ‘alayhi wa sallam) said, “inform him that Allah loves him.”

Price:
Sale Price: $7.95
Was:
Proofs of Tawheed By Sheikh Sulayman Al-Taymi ISBN: 9782987459590 Proofs of Tawheed Tawheed is on of the most fundementa aspects of a humans life as this will shape his or her out look forever.
11688

Price:
Sale Price: $12.95
Was:
The Fundamentals of Tawheed By Dr Abu Amina Bilal Philips ISBN: 9781898649403 This book presents a detailed explanation of the classical Islamic concept of God's unity as it relates to faith...
10839

Price:
Sale Price: $21.95
Was:
Book Of Tawheed The Oneness Of Allah By Sheikh Abdulmajid Al-Zendani ISBN: 9781874263098 Tawheed is the foundation of the entire religion of Islam, built upon the exclusivity to almighty Allah in...
10755