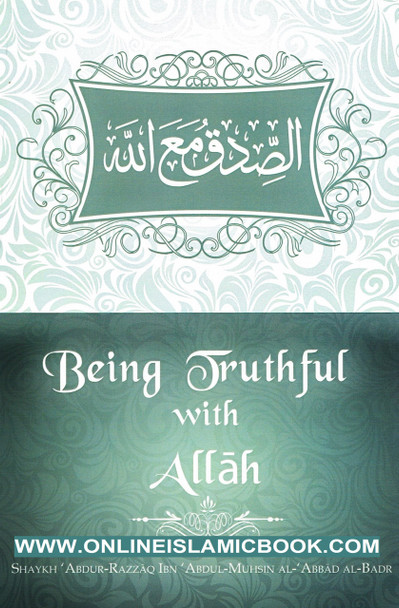 A small excerpt from the book…..

All praise is due to Allāh, the Lord of all that exists. I bear witness that none deserves to be worshiped in truth except Allāh alone with no partners and I bear witness that Muhammad is His slave and messenger (may Allāh send Salāh [1] and peace upon him, his family, and his companions all-together).

As for what follows:

Verily, the subject matter of this treatise is extremely important and it is worthy of deep study and a good deal of time due to its magnitude, importance and urgent need. The happiness of the servant in his worldly life and Hereafter is dependent upon its fulfillment. There is no safety nor happiness for him in this worldly life or in the Hereafter unless he is from its people. Whoever studies the Book of Allāh and the Sunnah of His Noble Messenger knows its great and extensive importance as well as its loftiness: Truthfulness, it is a lofty, great rank from the various ranks of those who advance to Allāh. Every action of the heart returns to it just as every corruption that occurs in the heart returns exclusively to its opposite, which is lying. So the source of every good in the outward and inward appearance of man is truthfulness and the source of every corruption in the outward and inward appearance of man is lying; thus good and corruption return back to these two sources.

Allāh has made the life of this world a place for examination and testing so that the truthful distinguishes himself from the liar. Allāh  said:

“Alif-Lām-Mīm. Do people think that they will be left alone because they say: “We believe,” and will not be tested. And We indeed tested those who were before them. And Allāh will certainly make (it) known (the truth of) those who are true, and will certainly make (it) known (the falsehood of) those who are liars. (Although Allāh knows all that before putting them to test).” [Sūrah al-Ankabut 29:1-3]

Meaning: This life is a field for examination and an abode of trials. Allāh has tested those who came before us from the various nations in this life: “And We indeed tested those who were before them,” meaning, He tested and examined them with what will distinguish the people of truth from the people of falsehood by way of it. And like them, this nation itself is subjected to being tested.

Explanatory Notes On The Treatise: Our Duty Concerning What Allah Orders Us With By Shaykh ʿAbdur-Razzāq Ibn ʿAbdul-Muḥsin al- ʿAbbād al Badr

Al-Ubudiyyah: Being a True Slave of Allah By Ibn Taymiyyah

Price:
Sale Price: $6.95
Was:
Al Jannah (Paradise) The Promise of Allah By Muhammad Syed Adly ISBN: 9781902570259 This book includes a description of Paradise, means to Achieve Paradise, acts which prevent the Muslims from...
11715

Extraordinary Occurrences from the Allies of Allah By Imam Al lalikai