Concise Commentary on the Book of Tawhid 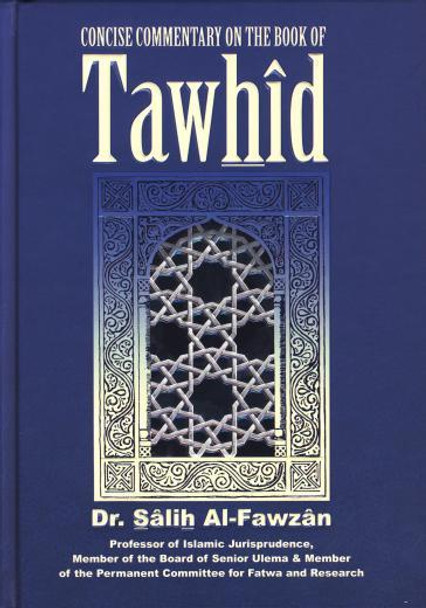 Concise Commentary on the Book of Tawhid

This book gives a clear explanation of the Muslim sound Creed which is the core of the religion of Islam, as the belief in Tawhid (monotheism) is the purpose for which Allah created both mankind and jinn, and thus, those whose belief in Tawhid is corrupt, are not considered Muslims. It is a commentary on the Book of Tawhid written by Sheikh Muhammad Ibn Abdul Wahhab. In this book, Dr. Salih al Fawzan has projected light on doctrinal issues of utmost importance in a genuine and reader-friendly style. This translated version of the book fulfills a long-standing need on the part of English-speaking Muslims for a brief, introductory book in Tawhid. It is a valuable book for novice readers, be they Muslims or non-Muslims, who do not have thorough knowledge of the sound creed, The chapters of this book focus on major issues in Tawhid such as the definition of Tawhid, virtue of Tawhid, warning against acts of shirk (polytheism), the Prophet's Maintenance of monotheism, and other topics. Dr. Salih al Fawzan (born in 1935) has obtained a PhD in Islamic jurisprudence and has a high profile in teaching jurisprudence. He is a member of many academic institutions including the Board of Senior Ulema, the Permanent Committee for Fatwa and Research. He has written more than sixty published works covering Muslim Creed, Islamic jurisprudence and Muslim's conduct.

MSRP:
Now: $27.95
Was:
By the grace and mercy of Allah, there are now a number of introductory compendiums of fiqh available in various languages. - However, this particular work has unique aspects that have made it a...
10877

MSRP:
Now: $5.95
Was:
Tawhid! Tawhid! Tawhid! Monotheism  According to Muslims, the article of faith is the key to enter Paradise and upholding it will bring salvation from the Hell-Fire.Imam Ibn al-Qayyim (AH...
13654

MSRP:
Now: $27.95
Was:
By the grace and mercy of Allah, there are now a number of introductory compendiums of fiqh available in various languages. - However, this particular work has unique aspects that have made it a...
10877

A Concise Description of Jannah & Jahannam

MSRP:
Now: $11.95
Was:
A Concise Description of Jannah (the Garden of Paradise) and Jahannam (the Fire of Hell) is excerpted from the larger work, Al-Ghunya li-Talibi Tariq al-Haqq (Sufficient Provision for Seekers of the...
10495

The Concise Manual of Marriage

MSRP:
Now: $12.00
Was:
A short yet concise manual on the legal rulings of marriage authored by one of the beacons of light in his time, Shaykh Muhammad Ibn Saalih al-'Uthaymeen (rahimahullaah), with comments from some of...
11127

A Concise Childrens Encyclopedia of Islam

MSRP:
Now: $31.95
Was:
This reference tool, which is a humble attempt to place before the English-speaking Muslim children a number of basic Islamic teachings and concepts, is primarily aimed at children of age ten years...
10580

A Concise Manual For The New Muslim

MSRP:
Now: $6.99
Was:
A Concise Manual for the New Muslim From the Publisher: The brothers have requested me to write (a small booklet) outlining a (comprehensive) methodology for the one who has entered into Islam,...
11540