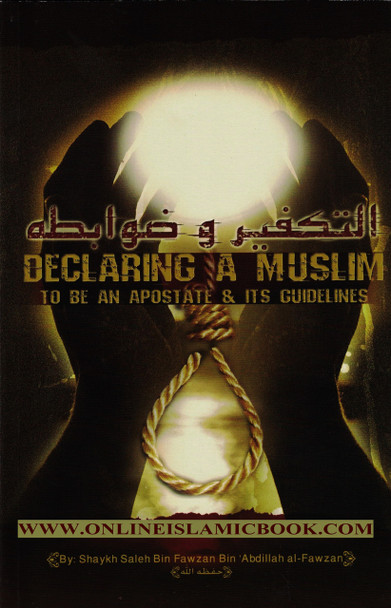 Price:
Sale Price: $8.99
Was:
— You save
Frequently bought together:

whoever is not proficient in this subject should not speak about it; nor should anyone who is not certain about its general rules as well as its principles enter upon it, not should anyone, who is neglectful in this matter who does not have Ghaira (sense of honor) about the religion of Allah; then as a result the corrupt ideologies and misguided sects will slip into the religion of Allah; then the truth will be mistaken for falsehood; and is charged to the Ummah, which is not from it and that which is not from it will enter into the religion. And this subject, whoever does not have religious knowledge, Ma'rifa (learning something by one of his five senses) and Baseera (strong understanding and intelligence) it is not permissible for him to speak concerning this matter; no one should be declared an apostate except the one, whom Allah and/or His messenger has declared him to be an apostate due to him committing one of the nullifiers of Islam, which has been agreed upon the people of knowledge. For that reason it is obligatory upon the Muslims to learn before he speaks; that he does not speak unless it is upon religious knowledge. Otherwise, he will be declaring a Muslim to be an apostate and he will have certainly committed two tremendous crimes; one of two is more severe than the other. The greater crime is that he spoke about Allah without knowledge.

Price:
Sale Price: $5.95
Was:
Salafiyyah Its Reality & Characteristics By Shaykh Saalih al-Fawzan A concise publication explaining the correct methodology in understand Islam according to the way of Prophet Muhammad and his...
11358

Meaning of La Ilaha Illa Allah Its Prerequisite and Its Impacts on the Individual and the Society By Dr. Fawzan Bin Salen Bin Fawzan

Price:
Sale Price: $25.95
Was:
The Islamic Awakening Important Guidelines By Shaykh Muhammad Ibn Salih Al-Uthaymin ISBN: 9781898649687 The Muslim Nation today is experiencing a blessed awakening in all aspects of its...
10835