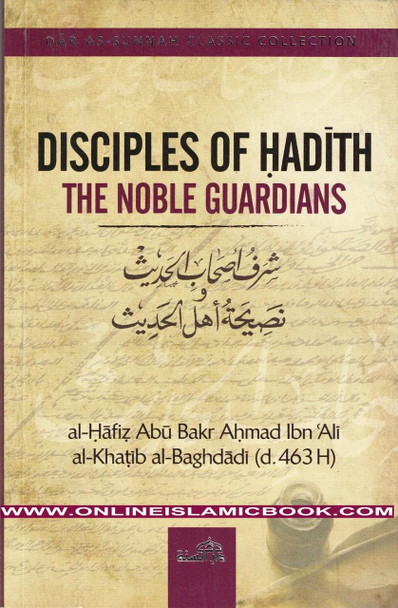 Abi Hatim al-Razi said: "No nation has existed since the creation of Adam, wherein its trustworthy ones memorize the narrations of the Messengers like this nation." Knowledge of Hadith is carried by the most worthy of people of every successive generation. They reprimand the radical elements for their attempted corruptions, the falsifiers for their distortions and the ignorant for their esoteric interpretations. They purify the Sunnah and refocus people's priorities back to the Prophetic narrations.

Countless books have been authored on the subject of Hadīth sciences, the special status its scholars occupy and the nobility of those who adhere to the Sunnah and the scholarly reports regarding it. This book is among the finest in this field in the way it's arranged and the ease with which one can grasp the content. Al-Khatīb recounts Prophetic narrations, statements of the Muhaddithīn and scholars of renown, by way of his own chain of transmissions (isnād); and this is an especially unique feature of this book.

Ibn Hajar accurately noted, "Every objective person knows that scholars of Hadīth who come after Al-Khatīb are indebted to his works." It isn't difficult to see why that is the case as Al-Khatib was from the last generation of titans that shone above others. He authored a number of pioneering works in Hadith literature.

It is a privilege for Daar as-Sunnah to be publishing its first edition of 'Sharaf Ashābu'l Hadīth' of Imām Al-Khatīb al-Baghdādi for the English speaker. A welcome introduction allowing a person acquaint themselves with the most delicate of Islamic sciences.

Price:
Sale Price: $29.95
Was:
Al Adab Al Mufrad by Imam Bukhari By Imam Bukhari ISBN: 9781872531180 "A unique and comprehensive volume pact with empowering Islamic examples of personal development in every aspect of daily...
10919

Price:
Sale Price: $14.95
Was:
Imam Al Ghazali on the Elucidation of the Marvels of the Heart By Imam Al-Ghazali  Imam Abu Hamid al-Ghazali (also pronounced as Ghazzali) is one of the Gifts of Allah to...
13689

Price:
Sale Price: $13.95
Was:
Usool Al Hadeeth The Methodology of Hadith Evaluation By Abu Ameenah Bilal Philips ISBN: 9789960987149 The science of hadeeth terminology and assessment is a particularly difficult field of...
10201