Explanation Of The Hadith Of Muaadh: Inform Me Of An Act That Will Cause Me To Enter Paradise & Distance Me From The Hell-Fire 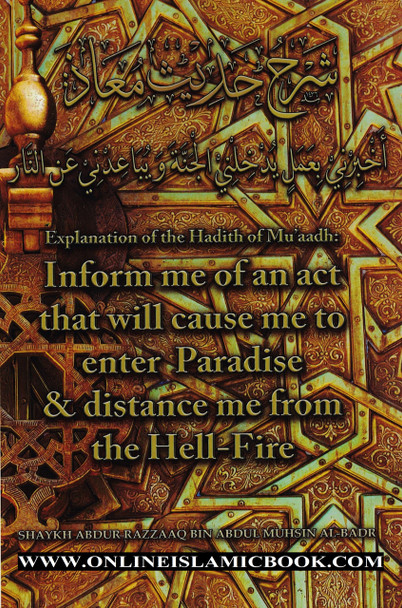 Explanation Of The Hadith Of Muaadh: Inform Me Of An Act That Will Cause Me To Enter Paradise & Distance Me From The Hell-Fire

A small excerpt from the book:

“I said: O Messenger of Allaah. Inform me about an act that would cause me to enter Paradise and distance me from Hell-Fire.”

Contained in this is their diligence (رضي الله عنهم) in those matters that necessitate entrance into Paradise and salvation from the Fire and separation from it. It has come in a Hadith that the Prophet (صلى الله عليه و سلم) asked a man:

(O Allaah I ask of you for Paradise and seek your refuge from the Fire)’, but as for me, I am not proficient in your ‘Dandanah’ (beautiful, elaborate chant), nor the ‘Dandanah’ of Mu’aadh.  So the Prophet (صلى الله عليه و سلم) replied, “We chant similar to that.” [2]

Meaning, Mu’aadh, all the Sahaabah (companions) and I chant about Paradise.  And it was by way of this chant concerning the Paradise and Hell-Fire that Mu’aadh (رضي الله عنه) asked this question: “I said: O Messenger of Allaah. Inform me about an act that would cause me to enter Paradise and distance me from Hell-Fire.”

Like this, every Muslim should continue his life, in his actions, and his acts of obedience chanting about Paradise; searching for the causes that enter one into Paradise, and so he performs them and he searches for the causes that enter one into Hell-Fire, and so he avoids them.  Thus, from this, it becomes known that it is required from the Muslim to understand the reasons for entering Paradise so that he can act upon them and know the reasons for entering the Hell-Fire so that he can avoid them; and it has been said:

“How will he be cautious, he who does now know what he is avoiding?!”

This Hadith (of Mu’aadh) has come as one encompassing this matter: encompassing the knowledge of the causes that enter one into Paradise and Hell-Fire so that one—in light of this—can comply with the reasons for entering Paradise while keeping away from the reasons for entering the Hell-Fire. Then the Prophet (صلى الله عليه و سلم) magnified the affair of this question:

“He said: Surely, you have asked me about a great matter…”

Tell Me About Hajj

MSRP:
Now: $9.95
Was:
The story of Hajj, the pilgrimage to Makkah, begins over 4000 years ago when, following the Divine command, the Prophet Ibrahim travelled for a long distance till he reached the hot, barren lands of...
10897

Remind Me By Learning Roots

MSRP:
Now: $11.95
Was:
Keep the sunnah of the Messenger of Allah (sallallaahu 'alayhi wa sallam) alive around the house with these colorfully illustrated reminders. There are 6 different themes covering morning and evening...
11487

Catch Me By naima Robert

MSRP:
Now: $11.95
Was:
Catch Me Catch Me is a collection of poetry and prose that is at once poignant and powerful. With honesty and passion, celebrated author Na'ima B. Robert takes the reader on a journey where...
12160

Explanation Of A Hadith Inclusive Of aqidah

MSRP:
Now: $11.95
Was:
From the book:It is affirmed in Ṣaḥīḥ al-Bukhārī and Ṣaḥīḥ Muslim from the Ḥadīth of Ibn ‘Abbās (may Allah be pleased with him) that the Prophet (may Allah raise his rank and grant him peace)...
12347

MSRP:
Now: $5.95
Was:
Allah and Me Allah knows what is best for us. Read this book to know what He expects from us and what He likes and dislikes. Allah and Me is a book which discusses some Islamic virtues which we...
13659

Lying is in the Hell-fire

MSRP:
Now: $3.50
Was:
This book has been written for our children to explain them what effect lying has on Faith. Eeman (Faith) increases and decreases. Therefore, in order for our Faith to increase it is necessary for us...
10609

The Obligation of Protecting Yourself and Family From The Hell Fire

MSRP:
Now: $6.95
Was:
" O you believe ! protect yourselves and your families from a fire whose fuel is men and stones, over which are angels steern and servere, who disobey not the commands they are commanded.
10961

Hell Fire Its Torments and Denizens

MSRP:
Now: $3.95
Was:
In all the divine revelations there is a constant warning of the Hell-Fire. Allah's Kindness and mercy are extended to many people whether believers or disbelievers. Reading about Hell-fire enables...
10860

Treasure From the Treasures of Paradise

Which way to paradise?

MSRP:
Now: $17.95
Was:
Which Way- to Paradise? seeks to elucidate Islamic principles and injunctions and elaborate on the very spirit of Islam, while at the same time exposing and refuting common misconceptions about the...
10217

MSRP:
Now: $5.95
Was:
This booklet Entitled thirty Ways to enter paradise in which i have accumulated a number of verses and sound Ahadith, which deal with the deeds that enable a believer to enter paradise. by allah's...
10745

The Inhabitants of Hell

MSRP:
Now: $9.95
Was:
The publisher is pleased to present the latest in its series of translations of works by a great and much-loved Egyptian scholar and teacher, the late Shaykh Muhammad Mitwalli al-Sha'rawi. Like all...
10689

Umm Aiman, A Women From The People of Paradise

MSRP:
Now: $7.95
Was:
This is an autobiography presented by Iman Daglas, an American woman who was Christian before, illustrating the ethical and moral values of Islam in the perspective of current tussle between...
10413

Remind Me By Learning Roots

MSRP:
Now: $11.95
Was:
Keep the sunnah of the Messenger of Allah (sallallaahu 'alayhi wa sallam) alive around the house with these colorfully illustrated reminders. There are 6 different themes covering morning and evening...
11487