Guide to Sound Creed - A Book on Muslim Creed and Faith 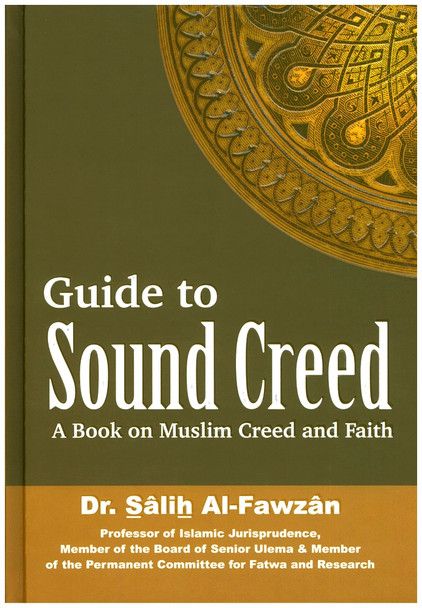 Guide to Sound Creed - A Book on Muslim Creed and Faith

Guide to Sound Creed A Book on Muslim Creed and Faith (Dr. Salih al Fawzan) Clarifying the sound Muslim Creed and calling people to believe in it, is the most crucial issue because it is the foundation on which one's deeds are judged whether denied or accepted.

This book gives clear explanation of the Muslim sound creed as pointed out in the Quran and Sunnah.

It is a valuable book for novice readers, be they Muslims or non-Muslims. The chapters of the book focus on major issues in Tawhid (monotheism) such as the necessity of learning and teaching the Muslim creed, the principles of Muslim creed; namely belief in Allah, the Angels, the Heavenly Books, Allah’s Messengers, the Day of Judgment, and the Divine Decree and Predestination as well as many other issues.

Dr. Salih al Fawzan (born in 1935) has obtained a PhD in Islamic jurisprudence and has a high profile in teaching jurisprudence. He is a member of many academic institutions including the Board of Senior Ulema, the Permanent Committee for Fatwa and Research.

The Islamic Creed and Its History

MSRP:
Now: $24.95
Was:
This book is about the reality of Islamic Monotheisim (Tawhid) and the ideologies of the sects that have falsely ascribed themselves to Islam as well as their dangers and evil effects upon confused...
11434

The Correct Creed that Every Muslim Must Know

MSRP:
Now: $15.95
Was:
“Indeed, the belief of Ahlus-Sunnah wal-Jamaa’ah is the religion of truth that every Muslim is obligated to believe in. For it is the belief of the Messenger of Allaah (sallallaahu...
11485

The Need for Creed Series (10 Books)

MSRP:
Now: $54.95
Was:
The Need for Creed series is a collection of 10 colorful board books of rhyming poetry full of faith-building information for young and confident readers. A wonderful introduction for impressionable...
10652

The Correct Creed that Every Muslim Must Believe

MSRP:
Now: $14.95
Was:
Presents the pure and simple aspects of the correct Islamic creed as per the saying of Allaah (Subhanahu wa Ta’ala): “And We have sent among every nation a messenger saying,...
11542

The Productive Muslim '' Where Faith Meets Productivity'' By Muhammad Faris

MSRP:
Now: $19.95
Was:
The Productive Muslim Book Ever wondered if there's a practical way to lead a productive lifestyle that combines the best of Islamic tradition and modern psychology and science? In "The Productive...
12178

Muawiya Restorer of the Muslim Faith

MSRP:
Now: $9.95
Was:
Mu’awiya ibn Abi Sufyan is a crucial figure for the history of Islam and one who has either been ignored because of the lack of information on this period of history, vilified for political...
10673

The Creed of Al-Wasitiyyah - A Textbook on Orthodox Sunni Creed

MSRP:
Now: $15.95
Was:
Written in response to a request from a Shafi'i Judge from Wasit, Iraq, ibn Taymiyyah penned this creed encapsulating the belief taught by the Prohphet Muhammad. In his own words, 'This is (an...
10725

MSRP:
Now: $16.95
Was:
The ideal Muslim is a man of the highest moral character. In his relation with his rabb (lord), himself, family, parents, relatives, friends, and the community at large, he has a most excellent...
10267