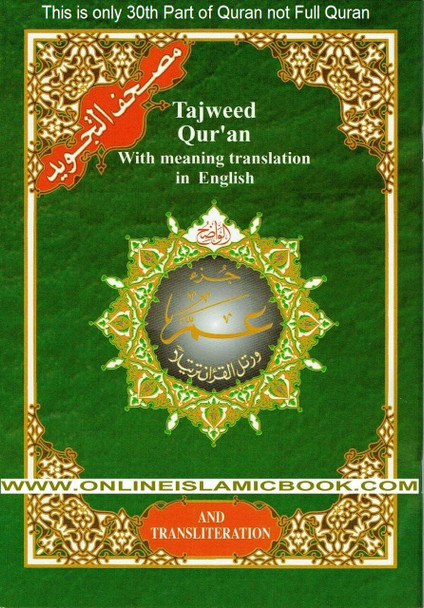 Single volume, paperback, part 30 of Holy Quran only, tajweed color coding style.
English - Arabic Juz Amma Tajweed-ul-Qur’an Large size, with TRANSLITERATION and translation of English meanings;
Size cm 17 x 24 cm
ALLAH (SWA) ordered us in his holy book to recite the Quran with tajweed …"recite the Quran modulatingly." the system of tajweed serves as a guide to improve the style of quranic recitation . It was in this way that the holy Quran was revealed to prophet Mohammed (PBUH) and also the manner in which he recited it. Therefore, the reader of the holy Quran longs to achieve the promise of Prophet Mohammed (PBUH):"whoever recites the Quran correctly and proficiently will be with the bountiful dutiful writers (the angels of the preserved tablet - Al lauh Al Mahfuz).
Based on a practical understanding of phonology, we have color-coded the place of some letters to facilitate the correct recitation of the holy quran. This had enabled us to classify these letters within 3 possible categories to enhance the reader's knowledge and remembrance of tajweed rules.
The letters which requires expanded vocalization. We used red color to highlight these letters.
The letters which is nasalized. These letters are green in color.
The dark blue color indicates the emphatic of the letter (R), the blue color indicates the unrest letters-echoing sound- (qualquala)
While the letters which are written but are not pronounced. These letters are gray in color.
The reader will get used to reciting the Quran by using color just as he got used to stopping at red lights and passing though green lights. By engaging I this sublime act, the reader will find him self applying 24 rules of tajweed with ease and precision while his mind is left free to contemplate and understand the meaning of holy Quran.