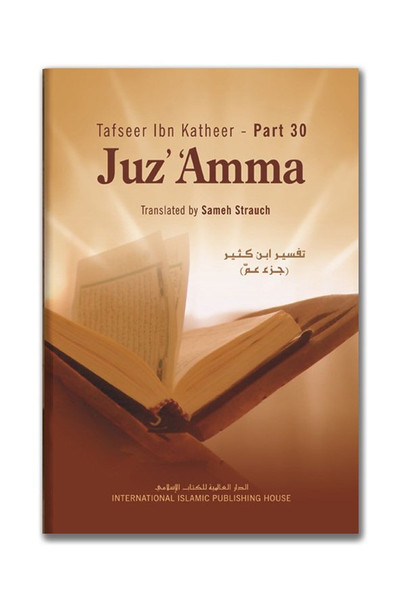 Juz' 'Amma, the thirtieth and last section of the Qur'an, is probably the most widely read and memorized of all the parts of the Qur'an. It is studied by Muslim children and by new Muslims, containing as it does, many short chapters which are easy to commit to memory. That said, it is also true that many of those who commit these verses to memory have little or no idea of their meaning and importance.

It is therefore with great pleasure that we present this, the new and revised second edition of Tafseer Juz' 'Amma, following the enthusiastic reception of the first edition. We ask Allah, the Almighty, the All-Powerful, to bless this effort by Sameh Strauch to bring to English-Speaking Muslims-and to new Muslims in particular, a taste of the classic Arabic work: Tafseer al-Qur'an al-'Adheem by Imam Abul Fida' Isma'eel Ibn Katheer ad-Dimashqi, a work that is rightly considered by many to be one of the best interpretations of the Qur'an ever written!

MSRP:
Now: $15.95
Was:
The 30th part of Tafsir Ibn Kathir is brief in form but comprehensive in interpretation. The meanings of the Qur'an have been interpreted by the Qur'an itself or by the traditions of the Prophet(S)...
10315

MSRP:
Now: $15.95
Was:
Introducing a comprehensive textbook for learning and understanding the 30th and final Juz (part) of the Holy Qur’an. All 37 Surahs are introduced with historical information about the...
11102

MSRP:
Now: $15.95
Was:
Introducing a comprehensive textbook for learning and understanding the 30th and final Juz (part) of the Holy Qur’an. All 37 Surahs are introduced with historical information about the...
11102