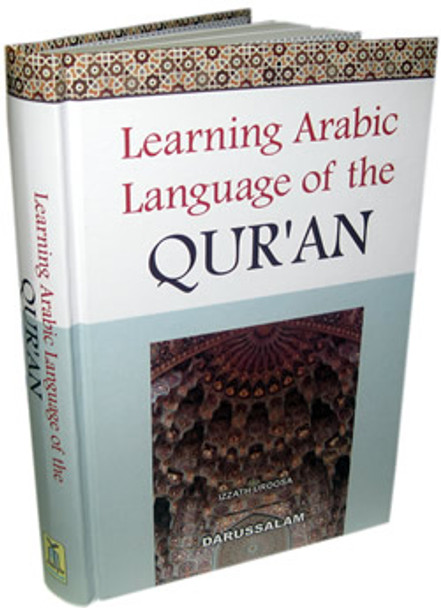 The message of the Qur'an is addressed to all creation, conveyed in the Arabic language. Allah Almighty says: "We have sent it down as an Arabic Qur'an so that you may understand." (12:2) Acquiring command over the Arabic language can be relatively easy for those who are native speakers, but can prove difficult for the non-speakers. The study of Arabic, therefore, cannot be taken lightly.

Other components that make this book attractive and useful are the simplicity of the language used, and its clarity and effectiveness of expression in achieving its objective. This book can be used by students of different ages whose intention is to learn Arabic with an eye toward proper understanding of the Qur'an.

The author has profound knowledge of both the Arabic and English languages. She also possesses a deep insight into Qur'anic expressions. She studied Arabic in Saudi Arabia and in India. This comprehensive book is the result of her diligence and commitment to learning and teaching the Qur'anic Arabic.

May Allah reward her for this valuable service to the understanding of the Qur'an and make it popular among the students and the academic world at large.

MSRP:
Now: $15.00
Was:
Allah (sw) ordered us in his holy book to recite the Quran with Tajweed ... 'Quran recitation modulating'. System of Tajweed serves as a guide for improving the recitation of Quranic style. It was in...
12605

Quran In Hindi Language (Arabic To Hindi Translation with Tafseer)

Quran In Hindi Language (Arabic To Hindi Translation with Tafseer)

MSRP:
Now: $44.95
Was:
Tafsir of Noble Quran in Pashtu Pakhtu Pashto translation of The Noble Quran with Arabic script, and tafsir (explanation) on the bottom. Pashtu is the language of Afghanistan and the north west...
11421

MSRP:
Now: $39.95
Was:
The Quran In Malayam Language   Malayalam is the language of the people of Kerala on the Malabar Coast of India. It is closely related to Tamil. (Malayalam adalah bahasa rakyat Kerala di Pantai...
11271

MSRP:
Now: $34.95
Was:
The Noble Quran In Bengali Language   It is an interpretation of the meanings of the Noble Quran in the Bangla language. The Persian script is in the large Arabic writing along with the...
11256

MSRP:
Now: $44.95
Was:
Tajweed Quran With Meanings Translation in Persian Language PLEASE NOT :  TITLE COLOR OF QURAN DEPEND ON AVAILABILITY Description From Publisher The idea behind the Color Coded Tajweed Holy...
12846

MSRP:
Now: $35.95
Was:
The Noble Quran In Filipino Language   Filipino language translation of The Noble Quran with side by side Arabic script and tafsir (explanation) on the bottom. Filipino is the national...
11257

MSRP:
Now: $6.00
Was:
This colorful workbook is designed to teach numbers and counting using Arabic numerals. The book uses simple, easy-to-follow dotted fonts and counting techniques that will help them learn the...
12405