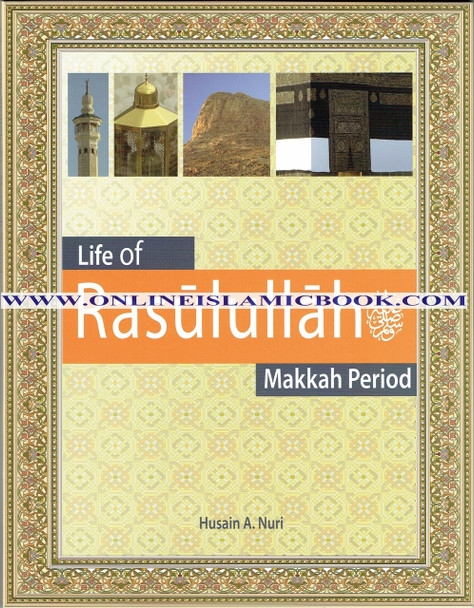 This 176 page full-color books is for weekend and fulltime Islamic schools. Students who are in 6-10 grade will benefit most from this textbook.

Many biographies of Raulullah (S) are available in almost every language in the world. Most of these are very detailed, analytical, and scholarly in nature. Only a few are written with the perspective of students in Islamic schools. Despite the lack of meaningful biographies for schools, a detailed study of Rasulullah’s (S) life has always been an important part of the curriculum in many schools whether they are part-time Sunday schools or full-time private schools.

Outstanding features of this book:

MSRP:
Now: $7.95
Was:
This workbook seeks to expand participants' self-awareness, spirituality, and religious identity through activities designed to enhance the material presented in the Messenger of Allah: Makkah...
11382

MSRP:
Now: $12.99
Was:
This book is a student-friendly presentation of the 30th Juz or part of the Qur’an. The book contains large and clear color-coded Arabic text, transliteration of the Arabic and translation in a...
12393

MSRP:
Now: $12.99
Was:
This is the second part of the seerah book. As the name states, this book describes the important events in the life of Rasulullah (S) while he was in Madinah. This book is for students in full-time...
12398

MSRP:
Now: $6.00
Was:
This colorful workbook is designed to teach numbers and counting using Arabic numerals. The book uses simple, easy-to-follow dotted fonts and counting techniques that will help them learn the...
12405

MSRP:
Now: $12.99
Was:
This is the second part of the seerah book. As the name states, this book describes the important events in the life of Rasulullah (S) while he was in Madinah. This book is for students in full-time...
12398

The Life of Perfection Shamail of Rasulullah

MSRP:
Now: $10.95
Was:
This book has been written in simple and lucid language for children and adults alike and designed to encourage great love and respect for the Prophet (peace be upon him!) in the hearts of children...
11375

MSRP:
Now: $15.00
Was:
The Islamic Studies Level 3 textbook is for 7-9 year old children, who have completed the Level 2 book from Weekend Learning or have similar Islamic knowledge. Ideally, third-grade students should...
12371

The Life and Sayings of Rasulullah Coloring Book

MSRP:
Now: $8.95
Was:
This wonderful coloring book is an excellent first introduction to the life of Prophet Muhammad(s). The first section concentrates on the story of his life while the second section offers a...
11374

MSRP:
Now: $12.99
Was:
Level 9 Islamic Studies textbook is for 13 to 15 year old students who have completed Level 8 book from Weekend Learning Series or students who have acquired similar Islamic knowledge. Ideally,...
12377

MSRP:
Now: $12.50
Was:
Muhammad Rasulullah: the Last Prophet is a new IQRA' textbook written for the Sirah & Haddith syllabus for Grade One pupils as part of IQRA International Educational Foundation's comprehensive...
11384

MSRP:
Now: $11.99
Was:
Whether it is school holidays, summer break or winter break it is always time to do a little extra fun activities to learn about Islam. By doing activites in each page of the My Islamic Activity...
12402