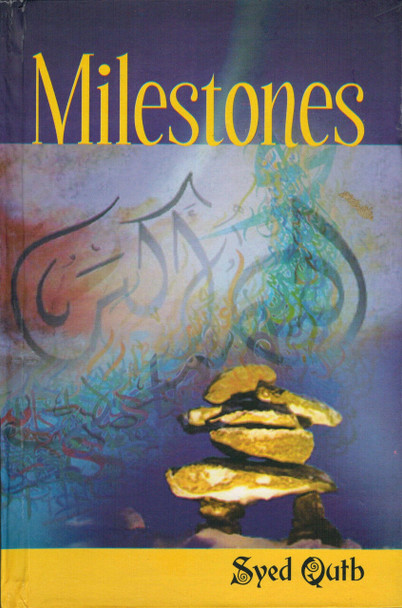 Mankind today is on the brink of a precipice, not because of the danger of complete annihilation which is hanging over its head-this being just a symptom and not the real disease

This work outlines the various stages in the establishment of a true Islamic life. After describing the mission of Islam and the methodology to achieve it, the author shows how the Prophet (PBUH) prepared and trained the first Muslim community and how later Muslims lost this initiative and revolutionary spirit.

Qutb, like most contemporary Islamic revivalists, was distressed with the growing distance between Islamic values, institutions and practices and the emerging post colonial Muslim societies, specially in his native Egypt. In Milestones, he sought to answer some of the fundamental questions such as why Islam needs to be revived? why no other way of life is adequate?

What is the true essence of an Islamic identity and an Islamic existence (he uses the term “concept” to signify these two elements)?
How was Islam established by the Prophet Muhammad (PBUH) and his companions?
Can the same method, which was undoubtedly divine in its conception be replicated again?
Qutb is particularly concerned with this issue of “Islamic methodology”. He believes that Islamic values and the manner in which they are to be realized (read as were realized by Prophet Muhammad (PBUH) and his glorious companions) both together constitute the faith of Islam.

Islam the Religion of Future By Sayyid Qutb

Price:
Sale Price: $4.95
Was:
Islam the Religion of Future By Sayyid Qutb The Islam way of life which is being described is not a temporary system that fits into a specific hist
11630

Belief of the Believer By Muhammad Syed Adly

Price:
Sale Price: $9.95
Was:
Milestones By Sayyid Qutb ISBN: 9788190340397 The author speaks about the unique Quranic generation, the nature of the Quranic method, the characteristics of Islamic society, jihad in the cause of...
11450

The Fatwa Regarding The Gawth, Qutb, Abdal And Awtad By Ibn Taymiyah

Price:
Sale Price: $14.95
Was:
The Fatwa Regarding The Gawth, Qutb, Abdal And Awtad By Ibn Taymiyah This text is among the remnants os Shaykh-ul-Islam IBN TAYMIYAH that are among his handwritings which are being published for the...
11678

Belief of the Believer By Muhammad Syed Adly

Price:
Sale Price: $8.95
Was:
Belief of the Believer By Muhammad Syed Adly ISBN: 9781902570273 Contained in this book are selective ahadeeth which portray the real life of a Muslim and a believer who has accepted Allah as...
11861