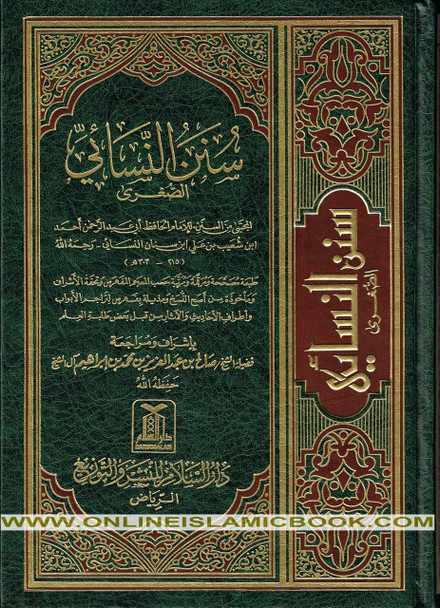 This hadith collection was compiled by the great scholar of hadith, Abu Abdul-Rahman Ahmad bin Shu'aib bin Bahr al-Nasai (Nasa'i of Khurasan) (214-303 AH). Sunan An-Nasai has the fewest weak ahadith after the two Sahih collections. This Sunan is one of the six is al-Mujtaba or as-Sunan as-Sughara, which is a synopsis of a large collection of ahadith which he considered to be fairly reliable. In the smaller collection, only those ahadith which he considered to be reliable have been included. It was compiled by the great scholar of hadith, Abu Abdur-Rahman Ahmad bin Shu'aib bin Bahr An-Nasai (Nasa' of Khurasan) (214-303AH). Imam An-Nasai, like other great scholars of hadith traveled to Baghdad, Ash-Sham, Egypt, Mecca, and many other cities to seek knowledge. He received the praises of many scholars including Ad-Daraqutni who said about him: "He is given preference over all others who are mentioned with this knowledge from the people of his time". Some scholars consider his compilation to have the least number of defective or weak narrations among the four Sunan. This great book of his contains 5761 ahadith, making it as an invaluable addition to anyone's library.

Price:
Sale Price: $44.95
Was:
Sahih Muslim (Arabic Only) By Imam Muslim bin Al-Hajaj Al-Naisabouri Sahih Muslim is the most authentic book of Hadith after Sahih Al-Bukhari and contains 7,563 Ahadith. The Muslim Scholars have...
11591

Price:
Sale Price: $29.95
Was:
Qasas-ul-Anbiya (Arabic Only) By Imam Abi Ismail In this book, the stories of the prophets have been compiled from 'Al-Bidayah wan-Nihayah' (The Beginning and the End) which is a great work of the...
11477

Price:
Sale Price: $44.95
Was:
Sunan Ibn Majah (Arabic Only) By Hafiz Muhammad Ibn Majah Sunan Ibn Majah is one of the six most authentic collections of the Ahadith and contains 4,341 total Ahadith. Like the other translations of...
11580