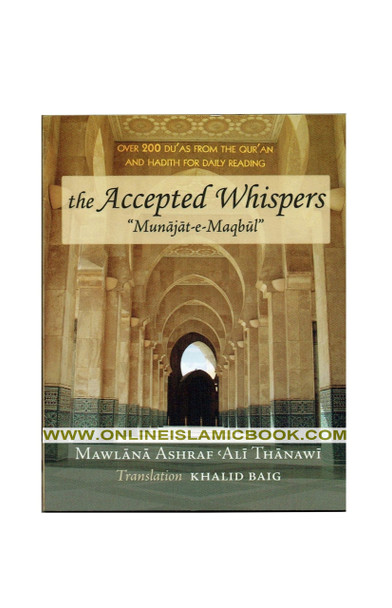 New pocket size (4.25" x 5.5") edition. A collection of over 200 du'as from the Qur'an and Hadith for daily reading. Translation in English by Khalid Baig. Includes brief references. Note that the pocket edition does not include transliteration like in the standard edition. D u'a (supplication) is the essence of worship. It is the weapon of the believer. With it we can never fail; without it we can never succeed. It is a whispering conversation with Allah, the most uplifting, liberating, empowering, and transforming conversation one can ever have. This book contains more than 200 du'as from the Qur'an and Hadith in Arabic for daily reading, along with their translations in English. This selection was originally compiled by Mawlana Ashraf Ali Thanawi under the title Munajaat-e-Maqbul. Like his Bihishti Zewar (Heavenly Ornaments), it has been very popular in the countries of the Indian subcontinent, where it has become a household name. This edition aims at making it accessible to the English-speaking world. The Compiler Mawlana Ashraf Ali Thanawi (1280-1362 AH/1863-1943 CE), commonly referred to as Hakim al-Ummat ("Sage of the Ummah"), was a giant among the Islamic scholars of the twentieth century. He was a master in all branches of Islamic scholarship including Qur'an, Hadith, Fiqh and Tasawwuf. A prolific writer, he had more than a thousand publications to his credit. He wrote for the minimally literate as effectively as he did for scholars. Nearly a century later some of his books remain as popular as they were when originally published. Mufti Muhammad Taqi Usmani writes, "The likeness of his accomplishments is not found in many preceding centuries." The Translator Khalid Baig is a writer on Islam and contemporary issues and the author of First Things First: For Inquiring Minds and Yearning Hearts (2004).

Tajweed Quran with Translation In English By Abdullah Yusuf Ali

Waswasah The Whispering Of The Shaitan

MSRP:
Now: $7.95
Was:
Allah (swt) warned us that the Shaitan will try to mislead the children of Adam and that he will whisper to us to disobey Allah and worship others beside Him. To be aware of this plot is part of...
10800

MSRP:
Now: $14.95
Was:
Ad-Du'a al-Mustajab: The Accepted Supplications By Shaikh Qasim Ar-Rifa'i A compendium of some 1227 hadiths on prayers and dhikrs of the prophetic sunnah About Imam al-Nawawi Imam Muhyi ddin Abi...
12555