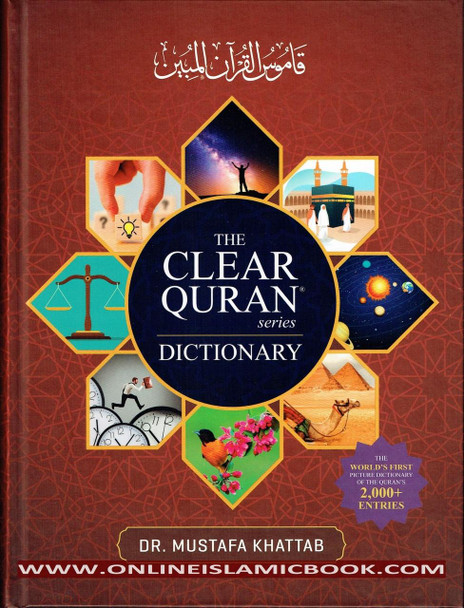 Introducing the world’s first picture dictionary of the Quran’s 2,000+ entries, ‎with the goal of empowering the majority of Muslims (who are not Arabs) to read ‎the Quran in its original, rich Arabic form in just 4-6 months, without having to ‎rely on translations. Five years in the works, this dictionary highlights the ‎connection between all words that share the same root. It’s very straightforward, ‎not indulging in redundant details or overly academic discussions that make the ‎book irrelevant.

Top 10 Reasons Why You Should Study This Dictionary:

Dr. Mustafa Khattab is a Canadian-Egyptian authority on interpreting the Quran. He was a member of the first team that translated the Ramadan night prayers (Tarawîḥ) live from the Sacred Mosque in Mecca and the Prophet’s Mosque in Medina (2002-2005). Dr. Khattab memorized the entire Quran at a young age and later obtained a professional ijâzah in the Ḥafṣ style of recitation with a chain of narrators going all the way to Prophet Muḥammad (S). He received his Ph.D., M.A., and B.A. in Islamic Studies in English with Honors from Al-Azhar University’s Faculty of Languages & Translation. He lectured on Islam at Clemson University (OLLI Program, 2009-2010), held the position of a lecturer at Al-Azhar University for over a decade starting in 2003, and served as the Muslim Chaplain at Brock University (2014-2016). He is a member of the Canadian Council of Imams and a Fulbright Interfaith Scholar. He has served as an Imam in the U.S.A. and Canada since 2007 and is the author of The Nation of Islam (2011) and Outfoxing Fox News (2017), and a contributor to the Encyclopedia of Muslim American History (2010). He has also written The Clear Quran® Series Dictionary, The Clear Quran® for Kids, and Shukran, the Grateful Young Man.