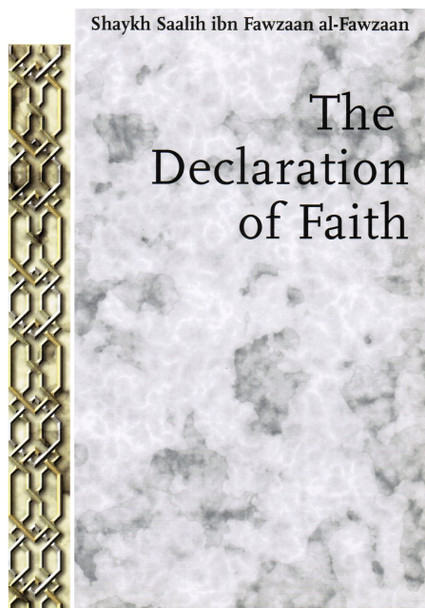 From the author's introduction: "Since this great declaration of laa ilaaha illallaah; that none has the right to be worshipped except Allaah, stands out amongst the various types of remembrance and because it is not merely something that is uttered by the tongue -- rather it has certain rulings, conditions and requirements attached to it -- I decided to choose this declaration as the subject of my discussion. Indeed, it is a declaration that the Muslims proclaim in their daily lives; in their call to Prayer and in their sermons and speeches. It is a declaration for which the whole of the creation was created; for which Allaah sent Messengers, revealed Books, and prescribed Divine Laws. Upon it rests the very foundation of the Religion and because of it swords are drawn-out. It is the Right of Allaah over His slaves; the declaration of Islaam and the key to Paradise. The book's discussion concerning the declaration of laa ilaaha illallaah encompasses the following points: its status in the life of a Muslim; its virtues and excellence; its lexical analysis; its pillars; its conditions; its meaning and requirements; when it benefits the one who says it and when it does not; its effects upon the individual and the society."

The Attributes of the Successful Caller By Dr. Saalih Ibn Fawzaan al-Fawzaan

The Tree Of Faith By Abdul Rahman Bin Nasir As-Sa'adi

Civilization of Faith By Mustafa as-Siba'ee

Price:
Sale Price: $9.95
Was:
Weakness of Faith By Muhammad Salih Al-Munajjid ISBN: 9789960672168  The phenomenon of weak faith has become very widespread among Muslims, and many people complain about the hardness of...
11180

The Foundations of Faith By Muhammad Bin Abdul Wahhab

Price:
Sale Price: $11.95
Was:
The Foundations of Faith By Muhammad Bin Abdul Wahhab ISBN: 9782874540011 This islamic book covers what a muslim should have basic knowledge of about the pillars of imaan and matters...
11334