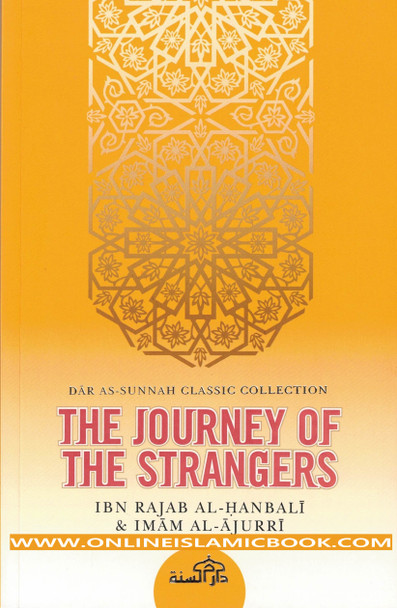 In this age of materialism, consumerism and extreme liberalism, the Muslim often finds himself at a loss, at odds to the ebb and flow of society, and holding to values, divinely revealed, that contrast starkly with the values held by many around him. He or she is looked at askance, accused of being backward, non-conformist and refusing to integrate. In the face of peer pressure, the resolve of some may weaken, the result being a watering-down of one's adherence to Islam and the values it calls to.

The Prophet warned us that a time would come in which Islam and the Muslims would be beheld as strangers, not just by non-Muslims but by many Muslims as well! He informed us that days were coming in which trying to keep hold of one's religion would be like holding red hot coals, and he stressed the paramount importance of holding fast to Islam in its pristine purity during that time, stating that this, and only this, was the path to success in this life and the next.

This book is a compilation of two tracts which explain the hadith, 'Islam began as something strange and it will return to being strange just as it began, so tuba for the strangers!' It is hoped that it will be a source of comfort and inspiration for the Muslim who is striving to follow Islam at a time when the Muslim could well feel alienated and alone in the world.

The first is a treatise penned by the great Imam, Al-Ajurri (d.330H), a scholar known for his deep knowledge and piety, his quality being recognised by all. The second is a monograph written by the Imam, Ibn Rajab Al-Hanbali (d.795H), a scholar praised extensively for his vast knowledge, ascetism and expertise in the Hanbali school of thought. An introduction has been added from the words of Shatibi and an appendix from ibn Al-Qayyim's monumental Madarij al-Salikin.

Price:
Sale Price: £ 7.30
Was:
The Excellence of Knowledge By Ibn Rajab Al Hanbali ISBN: 9781904336198 These are some brief words about the meaning of knowledge and its classification into that which is beneficial and that...
10728

Price:
Sale Price: £ 11.37
Was:
Inheritors Of Prophets By Ibn Rajab Al-Hanbali ISBN: 9781904336532 Possessing scholarly knowledge of Islam brings you closer to your lord, Most Exalted. He is the Possessor of all knowledge...
12528

Journey Through the Quran By Muhammad Al Ghazali

Price:
Sale Price: £ 48.88
Was:
Journey Through the Quran By Muhammad Al Ghazali ISBN: 9781870582902 Sheikh Muhammad al-Ghazali was one of the most influential Islamic scholars of the twentieth century, both as an author and...
10671

Price:
Sale Price: £ 11.37
Was:
Inheritors Of Prophets By Ibn Rajab Al-Hanbali ISBN: 9781904336532 Possessing scholarly knowledge of Islam brings you closer to your lord, Most Exalted. He is the Possessor of all knowledge...
12528

I want to go on a Journey By Shazia Nazlee