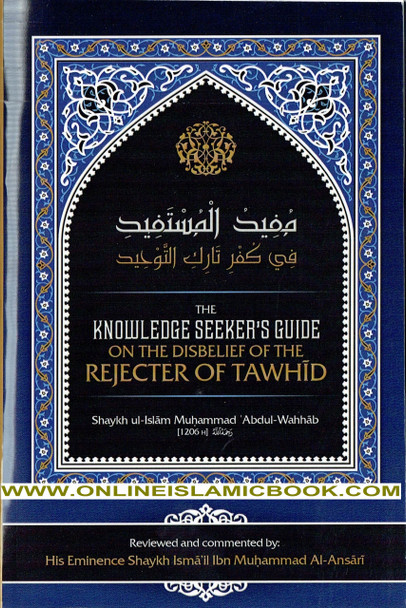 It is clear that not caring about learning religion is one of the causes of being the worst of creation. If this ignorant man asked about this, what about those who claimed that they follow the Prophets and know their message, and everything is accessible, but he does not care? And when he attends or listens, he will be as mentioned by Allāh:

“Comes not to them an admonition (a chapter of the Qurʾān) from their Lord as a recent revelation but they listen to it while they play. With their hearts occupied (with evil things).” [Sūrah Al-Anbiyā’ 21:2-3]

Also, when the Prophet (May Allāh raise his rank and grant him peace) said:

“Allāh has sent me,” he replied: with what you have been sent? He said: so and so.”

Thus, it is clear that the essence of Allāh’s Message and the Prophet’s Dawah is the Oneness of Allāh (Tawhīd), no partners with Him, and destroying idols. It is clear that idols cannot be destroyed but by showing enmity against them and combating them. So, think about the essence of religion. He also understood Tawhīd and that it is a great notion. Therefore, he said: “Who has followed you in this?”  he replied: “a freeman and a slave,” he said: all the scholars, kings and laypeople were against his opinion, and no one followed his opinion.” This indicates that the truth can be followed by the least amount of people, but falsehood may be followed by many.

Fuḍayl Ibn Iyāḍ (May Allāh have mercy on him) said:

“Do not be afraid of the truth for its little followers, and do not be fascinated with the falsehood for its numerous bad successors .“

The Excellence of Knowledge

MSRP:
Now: $8.95
Was:
These are some brief words about the meaning of knowledge and its classification into that which is beneficial and that which is not; as well as a note regarding the knowledge of the Salaf over that...
10728

The Book of Knowledge

MSRP:
Now: $11.00
Was:
This is the first book in the "Classical Knowledge Series" - a collection of selected scholarly works from the past that deal with the subject of religious knowledge. This particular book is a...
11014

MSRP:
Now: $5.95
Was:
Tawhid! Tawhid! Tawhid! Monotheism  According to Muslims, the article of faith is the key to enter Paradise and upholding it will bring salvation from the Hell-Fire.Imam Ibn al-Qayyim (AH...
13654

The Fruit of Knowledge

MSRP:
Now: $5.95
Was:
Knowledge is to be sought for its implementation and to actualize one's servitude to Allah, the Sublime, the Exalted. For this reason it precedes action. You begin with it so that actions,...
11470

A Daily Routine for the Seeker of Knowledge

Sincere Counsel to the Seekers of Sacred Knowledge

MSRP:
Now: $11.95
Was:
The challenges of parenthood are experienced by all and many times a parent is hard put to ascertain the correct course of action in bringing up a child in the correct Islamic manner, or, when...
10723

The Responsibility for the Seeker of Knowledge

MSRP:
Now: $7.95
Was:
Includes: The Responsibility of the seeker of Knowledge towards himself Sincerity and Royalty for the sake of Allah Preaching and Teaching Calling and Inviting people towards Allah Warning against...
11654

MSRP:
Now: $32.95
Was:
A comprehensive guidebook for the Muslim who wishes to learn about his or her religion with the proper goal and aim, in the proper way, and through the proper books. This compilation includes a...
12001

The Disappearance of Knowledge

MSRP:
Now: $29.95
Was:
This book is an amazing work by the Noble Scholar Muhammad Al-Imaam, which discusses in detail the merits of knowledge and its people. It goes into extensive detail about the many reasons that...
11504