The Night Prayer In Ramadaan 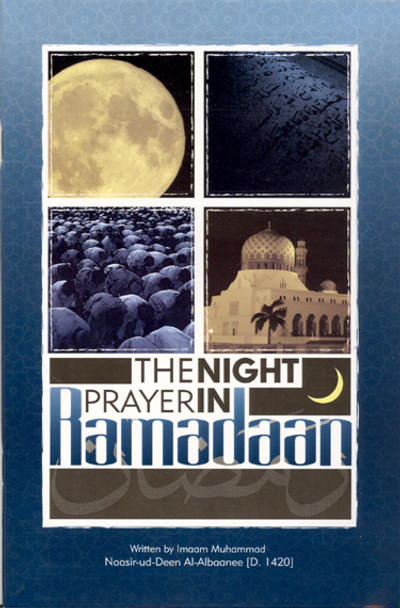 The Night Prayer In Ramadaan

Before you is a complete translation of the book "Qiyaamu Ramadaan" (the Night Prayer in Ramadaan) written by Imaam Muhammad Naasirud-Deen al-Albaanee.

This treatise is in essence an abdridged version of one of al-Albaanee's other books, Salaatut-Taraaweeh, along with several additional points of benfit and a section on 'Itikaaf. The book's introduction also consists of a counter-refutation against those who replied to al-Albaanee's afore-mentioned book of Taraaweeh.

The main core of the book, however, contains a point-by-point discussion on the Night Prayer in Ramadaan, as well as the benfits and rulings of 'Itikaaf, lsong with their evidences. The Arabic text for all the ayaat and ahadeeth have also been included in this edition so as to increase the benefit for those readers who wish to memorize the proofs.
View AllClose

MSRP:
Now: $9.95
Was:
Shaykh Saleem al-Hilalee and Shaykh Alee Hasan al-Halabee have managed to produce an original work , collecting the ahadeeth of the Prophet (peace be upon him) and the sayings of the Companions, as...
11157

MSRP:
Now: $14.95
Was:
A most rewarding and fulfilling part of a Muslim's worship are those blessed moments that he spends praying in the depth of the night, privately addressing his Great Lord, sincerely glorifying Him,...
11314

MSRP:
Now: $7.95
Was:
Prayer Practice is great for motivating your children to perform the five daily prayers. Each set contains eight colourful charts and accompanying stickers as well as a children's Qibla direction...
11499

MSRP:
Now: $10.95
Was:
From the book: Al-Khushuʿ in Ṣalāh: Presence of the heart therein before Allāh the Exalted in love and honor, fearing His punishment. While desiring the reward of the Ṣalāh to acquire a tranquil...
12265

MSRP:
Now: $14.95
Was:
A most rewarding and fulfilling part of a Muslim's worship are those blessed moments that he spends praying in the depth of the night, privately addressing his Great Lord, sincerely glorifying Him,...
11314

The Work of Day and Night: Suyuti's Collection of Prophetic Practices and Prayers By Jalal al-Din Suyuti

Angie Moon And The Legends The Speedster By Huda Ayaz

The Night The Moon Split By Ivanka Dimitrova

MSRP:
Now: $24.95
Was:
New Revised Edition with full color pictures and Lessons & Morals at end of each section. The biography of the Prophet is a very noble and exalted subject by which Muslims learn about the rise...
10090