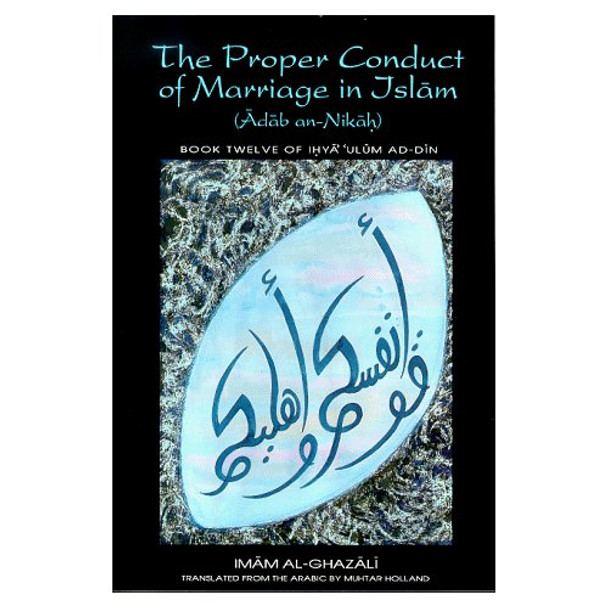 This is Book XII of Imam Ghazali's 'Ihya Ulum al-Din (Revival of the Religious Sciences), translated by the eloquent Muhtar Holland. Topics of the section on marriage in the 'Ihya include: benefits of marriage, challenges of marriage, selecting a spouse, rules of married life, relations between husband and wife, having children, preferred actions at childbirth, obligations of spouses to each other, and avoiding divorce. Imam Abu Hamid Muhammad al-Ghazali (450/1058-505/1111) is justly described as a "towering figure" in the history of Islam. He was born in the Iranian town of Tus, studied Islamic law and theology at the Seljuq college in Nishapur, and became a distinguished professor at the famous Nizamiyya University in Baghdad. Despite his glittering success, he was inwardly dissatisfied, so he abandoned his career for the life of hardship, abstinence and devotion to worship. During ten years of wandering, he experienced a spiritual transformation, in which the Truth came to him at last, as something received rather than acquired. Blessed with an inner certainty, he then applied his outstanding faculties and vast learning to the task of revitalizing the whole Islamic tradition. Through his direct personal contacts, and through his many writings, he showed how every element in that tradition could and should be turned to its true purpose. Imam Ghazali's magnum opus is aptly entitled "The Revival of the Religious Sciences [Ihya' 'Ulum ad-Din]." In its four volumes, the author deals with every aspect of the outer and inner life of the Muslim. The subject of Marriage, discussed in the section covered by this translation, is surely of particular interest and importance to Muslims and non-Muslims alike.

Al-Ghazali on Conduct in Travel: Book XVII of the Revival of the Religious Sciences (Ghazali Series) By Abu Hamid al-Ghazali

Salah Ad Din and the Crusades By Qaiser M. Talib