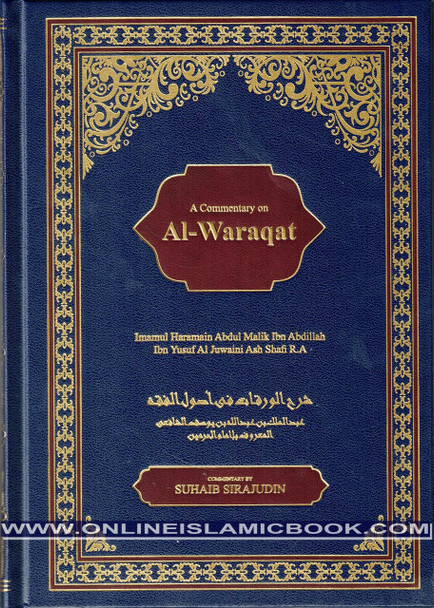 This is a commentary on the book of Imamul Haramin Abul Malik Al Juwaini's Al-Waraqat. It is a text on the subject of Usul al-fiqh.

It is a text on Islamic Jurisprudence (Usul al-fiqh) according to the majority of scholars but more specific to the Shafi'i School of Thaught.

The Arabic text (Matn) of Al-Waraqat with the English translation followed by the commentary in English.

Usul al-Fiqh deals with the sources of Islamic law and the discipline dedicated to elucidating them and their relationship to the substantive rulings of the law.

The commentator writes in his notes:

"This book, is a comprehensive commentary of a book entitled Al Waraqat, which literally translates as "The Pages", by Imamul Haramain Abdul Malik Ibn Abdillah Ibn Yusuf Al Juwaini Ash Shafi R.A. We pray that this commentary will provide useful information and advice to all its readers, regardless of their background, and that they may all benefit from it. We also hope that our efforts on this book will be counted among our good deeds with Allah, the Almighty." Ameen.

Imam al-Haramayn Dhia' ul-Din Abd al-Malik ibn Yusuf al-Juwayni al-Shafi'i (419-478 AH) was born in a village on the outskirts of Nishapur in Iran.

He was a prominent Muslim scholar known for his gifted intellect in Islamic legal matters. His father, Abu Muhammad 'Abdallah bin Yusef al-Juwayni was a well-known master of Law in the Shafi'i community as well as a Shafi'i teacher and his elder brother, Abu'l-Hasan 'Ali al-Juwayni, was a Sufi teacher of Hadith.

Al-Juwayni travelled to Mecca and Medina in search of an interim home. He taught and studied there in Hijaz for four years. During this time, al-Juwayni became very popular because of his father's prominence in the scholarly world.

He was invited back to Nishapur by the founder of the Shafii Madrasa, Khwaja Nizam al-Mulk. Upon his return, he was appointed to teach the doctrine of the Ash'arites at the Nizamiyya Madrasa until he died in 478 AH.

Imam Al-Juwayni was the teacher of one of the most influential scholars in the Islamic tradition, particularly Sufism, Imam al-Ghazzali.

He was a master of the Qurán and Hadith texts in addition to being well versed in the particular school of Shafi'i and theological practices of the Ash'arite persuasion.

Shaykh Suhaib Sirajudin was born in 1985, in Blackburn, Lancashire, UK and completed his primary education in Blackburn. He memorised the Quran by heart and graduated from the Darul Uloom – Islamic College – Bury, UK in 2000. He then continued his studies for a Degree in Software Engineering at Blackburn College, an associate college of Lancaster University, and for his Masters in Computer Security from the University of Liverpool.

He is an Indian-British preacher and imam educated in both Islamic and Western traditions. Since 2017, he has served as Dean of Academic Affairs at the Islamic International College, an international Islamic educational institution with a center in Bolton, Greater Manchester.

She is the Queen by Dr. Muhammad Al-Arifi