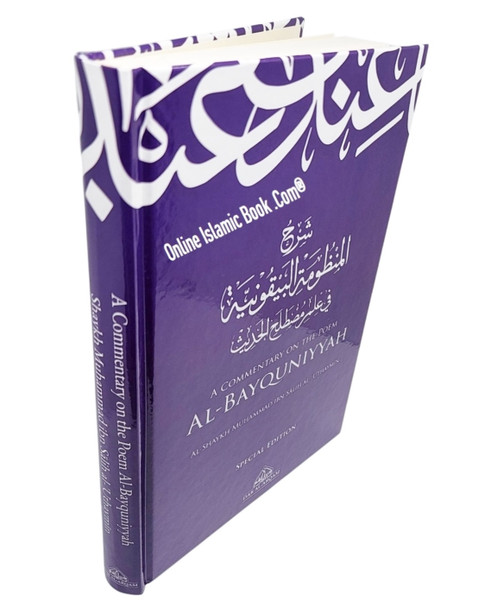 A commentary on the famous poem in the field of hadith sciences entitled al-Manzumah al-Bayquniyyah by Shaykh Muhammad ibn Saalih al-Uthaymeen (Rahimahullah).

The Merits of the Poem of al-Bayquni:

Shihab al-Din al-Dimyathi said, “The poem of the knowledgeable Imam of understanding and perception, al-Shaykh al-Bayquni (Rahimahullah) is one of the most interesting summaries of the science of hadith and the most eloquent of the writings upon which one takes the rigorous course upon, for it is comprised of clear yet fine expressions that overwhelms its counterparts with a grim face.”

The importance of this subject:

The knowledge of Usul al-hadith is a science that serves the radiant Prophetic traditions; with it one can distinguish the Prophetic narrations in terms of authenticity and fabrication, soundness and weakness.

Al-Imam ‘Abdullah ibn al-Mubarak said, “The quality of the hadith is not in the conciseness of the isnad, rather its quality lies in the soundness of its narrators."

Al-Imam Yahya ibn Sa`id al-Qattan said, “Do not look at the hadith but rather look at its chain. If the chain is sound [then the narration is sound]. If not, then do not be deceived by the narration with a chain that is not sound.”

Al-Hafiz ibn Qutaybah al-Daynuri said, “There is no nation amongst the nations with the isnad like their chains (i.e. this nation); narrator from the narrator, the trustworthy from the trustworthy in such a way until it reaches the Prophet (salallahu alayhi wa sallam) and his Companions, so that the sound can be differentiated from the weak, the connection from the disconnected and the fabricated from the genuine.”

About The Commentator Shaykh Uthaymin

Muhammad ibn Salih al-Uthaymin al-Wuhaibi al-Tamimi (1925-2001 CE) was one of the most prominent Saudi Islamic scholars of the latter half of the twentieth century.

Born in Saudi Arabia, he memorised the Qur'an at an early age and studied under some of the well-known scholars of the time including Abd ar-Rahman as-Sa'adi, Muhammad Ash-Shanqiti, and 'Abd al-'Aziz ibn Baz.

During his many years of study, he became world renowned as a reviver of Salafi dawah and his knowledge in fiqh.