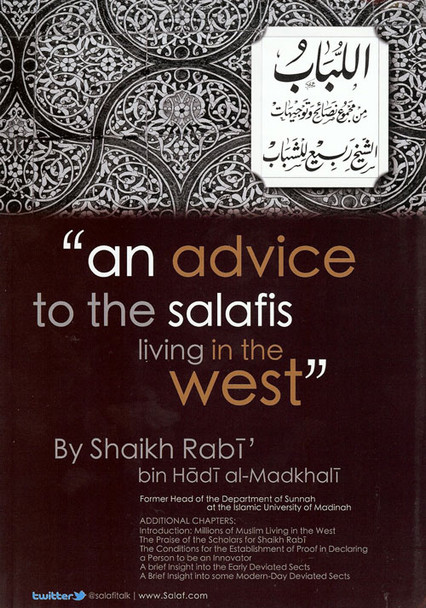 With 16 million Muslims living in the European Union, (53 million in Europe as a whole), and 7.5 million in the USA & Canada, it is important that the Salafis are well-acquainted with what it means to be upon this noble Path - to know what Salafiyyah calls to and its principles so that they may earn the pleasure of their Lord, attain salvation and protect themselves from misguidance and the anger of Allaah, the Most High. In the lands of the West where there are large Muslim minorities, the people are in need of guidance and direction - especially since most of the callers who ascribe themselves to Islam are upon misguidance and sectarianism in opposition to the Qur'aan, Sunnah and the methodology of the Companions of Allaah's Messenger (peace be upon him). You will quite often find in a single city in Europe or North America, scores of competing factions of Muslims vying for the hearts (and allegiance) of the Muslims, each one claiming that it is upon the Truth to the exclusion of others. They can't all be right? Can they? The author of this treatise, Shaikh Rabi al-Madkhali, expounds upon the challenges facing the Salafis living in the West and imparts some invaluable advice to them. A must read.

Be A Serious Salafi By Dr Shaykh AbdusSalam Al-Sihaymi

Price:
Sale Price: $14.95
Was:
The Salafi Methodology By Dr. Muhammad Ibn Umar Bazmul ISBN: 9780982808412  This is a book that was written concerning the Salafi methodology, its definition, distinct characteristics and its...
11744

Price:
Sale Price: $8.00
Was:
The Foundations Of The Salafi Dawah By Shaykh Abdus Salaam Bin Burjis ISBN: 754097315027 Form the Book: I say: When I saw that this despicable action from these organizations had affected...
12365

Be Salafi Upon The Path By Shaykh Abdus-Salaam As-Suliaymee