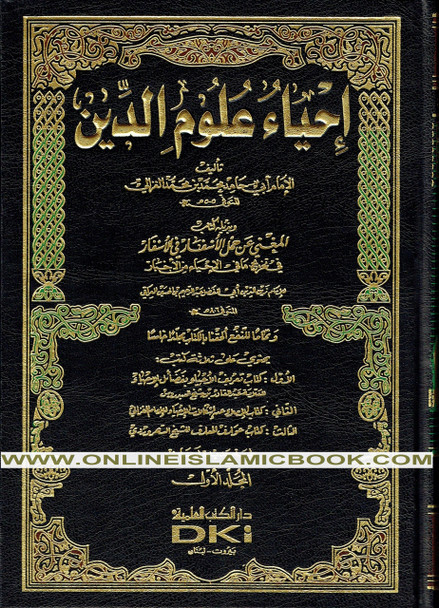 Revival of the Religious Sciences by Imam Abu Hamid Al Ghazali (R) There is much more to know about that miraculous Book ihya’ `ulum al-din and it’s great author Abu Hamid Muhammed al-Ghazali, the most applauded Muslim scholar simultaneously in the secular world and in the Muslim world. Wikipedia says: “Ghazali has sometimes been acclaimed by secular historians such as William Montgomery Watt to be the greatest Muslim after Muhammad (PBUH) (traditionally among Sunni Muslims, the greatest Muslim after the Prophet, is Abu Bakr (RA)” His works has been transported – not merely translated – to the western world to an extent that modern publishers cite western libraries and sources to prove their authenticity. About the Author: Abū Ḥāmid Muḥammad ibn Muḥammad al-Ghazālī (1058–1111), known as Al-Ghazali or Algazel to the Western medieval world, was a Muslim theologian, jurist, Motklim, and descent. Al-Ghazali has been referred to by some historians as the single most influential Muslim after the Islamic prophet Muhammad. Within Islamic civiliation he is considered to be a Mujaddid or renewer of the faith, who, according to tradition, appears once every century to restore the faith of the community. His works were so highly acclaimed by his contemporaries that al-Ghazali was awarded the honorific title "Proof of Islam" (Hujjat al-Islam). Others have cited his opposition to certain strands of Islamic philosophy as a detriment to Islamic scientific progress. Besides his work that successfully changed the course of Islamic philosophy—the early Islamic Neoplatonism that developed on the grounds of Hellenistic philosophy, for example, was so successfully criticised by al-Ghazali that it never recovered—he also brought the orthodox Islam of his time in close contact with Sufism.

Price:
Sale Price: $39.95
Was:
Description : The Shaykh and Imam, the Proof of Islam, Abû Hâmid Muhammad ibn Muhammad al-Ghazâlî, may God have mercy upon and be pleased with him, stated: '' 'Thank God for all His bounties; for...
10978

Al-Ghazali on the Manners Relating to Eating: Book XI of the Revival of the Religious Sciences (Ghazali Series) By Abu Hamid Al-Ghazali

Price:
Sale Price: $39.95
Was:
Description : The Shaykh and Imam, the Proof of Islam, Abû Hâmid Muhammad ibn Muhammad al-Ghazâlî, may God have mercy upon and be pleased with him, stated: '' 'Thank God for...
10978

Price:
Sale Price: $9.99
Was:
What were the Crusades? Who were the heroes? Who were the villains? What can we learn from it all? How long did the King of England actually spend in England during his reign and what was Salah...
10525