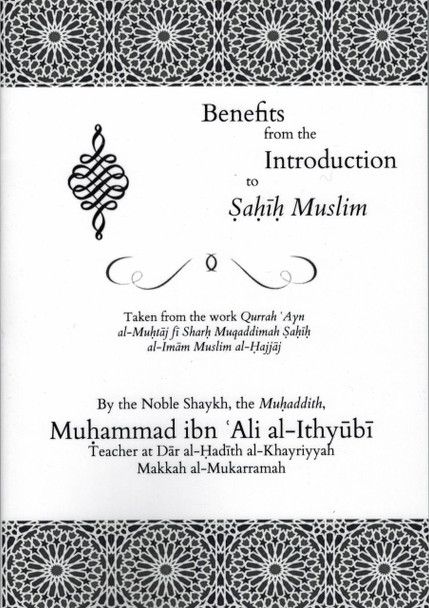 The Muqaddimah to the Sahih of Imam Muslim contains some of the most important principles found in the creed and methodology of the people of Sunnah and Hadith. In this illustrious introduction, the author evidences the perils of lying on the Messenger of Allah (peace be upon him), the punishment for those who falsely attribute narrations to him, the position of the scholars regarding narrating from innovators the way of the Salaf in disparaging and refuting the people of desires. He also outlines the methods of the Muhaddithun in preserving the tradition of the Messenger of Allah (peace be upon him). - See more at: http://sunnahpublishing.net/new-book-benefits-from-the-introduction-to-sahih-muslim-explained-by-shaykh-muhammad-ibn-ali-al-ithyubi The book before the reader includes benefits from the work of Shaykh Muhamamd ibn 'Ali al-Ithyubi's explanation of Muslim's introduction. In it Shaykh Muhmmad elucidates matters of 'Aqidah, Manhaj, and the sciences of Hadith - such as al-Jarh wa al-Ta'dil - which demonstrate the great effort of the scholars of Hadith in purifying what has been passed down from the statements and actions of the Prophet of Islam (peace be upon him). all of this makes the volume a necessary addition to every library containing the classical collections of Hadith, most specifically the Sahih of Imam Muslim.

MSRP:
Now: $44.95
Was:
Sahih Muslim (Arabic Only) By Imam Muslim bin Al-Hajaj Al-Naisabouri Sahih Muslim is the most authentic book of Hadith after Sahih Al-Bukhari and contains 7,563 Ahadith. The Muslim Scholars have...
11591

MSRP:
Now: $169.95
Was:
Sahih Muslim Urdu (5 Vol Set) By Imam Muslim Ibn Al-Hajjaj The work of Imam Muslim needs no introduction. His collection of the sayings of the Prophet Muhammad (PBUH) is one of the most authentic...
13485