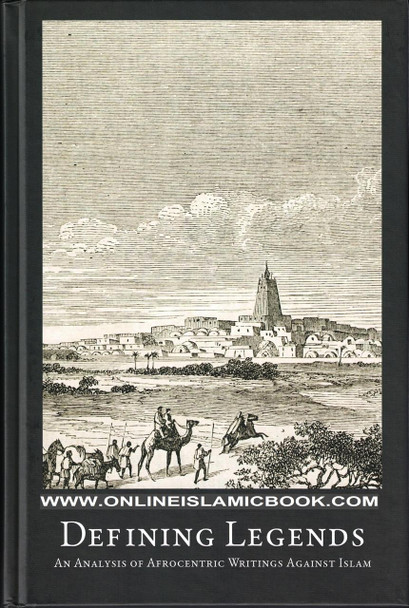 Defining Legends was initially started in 1999 as 75 pages and has since grown, with its author adapting, rejecting and supplementing material and reflecting on core themes of the book.

Extracts from the author's introduction:

Since the 1960s there has been a rapid and phenomenal increase of people in the West embracing IsLam and the majority of those in the West who are turning to Islam are people of African origin in the UK and the USA, At the same time, Afrocentric Ideology has also spread in the West which has, since the 1970s, 'argued that Nani itself was a religion of Arab conquerors that plundered Africa to the detriment of the African peoples themselves and this (kemet Afrocentricity, various Hebrew Israelite cults or 'black Orientalisor) has emerged to counter this growth of people of African origin turning to Islam.

Defining Legends will critically evaluate mainstream black Orientalism and extremist Afrocentric claims about is/Am and bring new evidence to challenge their false assumptions. The documentary evidence presented in some Afrocentric literature about Islam will be analysed and dismissed where necessary. This study will mainly dismiss the anti-Islamic trend within some Afrocentric perceptions of Iskim along with recourse to more corroborated criteria and demonstrate the incoherence of their arguments against Defining Legends also demonstrates how much of Afrocentric thought regarding Islam is in fact entrenched in a Eut °mitt ic origin, therefore based upon anti-Islamic European Christian, freemason and Zionist sources,

AbdulHaq has lived and travelled in Africa and the Middle East, and in 2004 in Riyadh was one of the main authors of the ICO Islamic Studies Curriculum project, which is a key resource for Islamic schooling. He has also authored and translated many books into English.

Perceptions of Islam in European Writings By Ahmad Gunny

Against Smoking: An Ottoman Manifesto By Ahmad Al-Aqhisari

Perceptions of Islam in European Writings By Ahmad Gunny

Illuminating The Darkness: The Virtues Of Blacks And Abyssinians By Al Allamah Abul-Faraj Ibn Al Jawzi

Angie Moon And The Legends The Speedster By Huda Ayaz