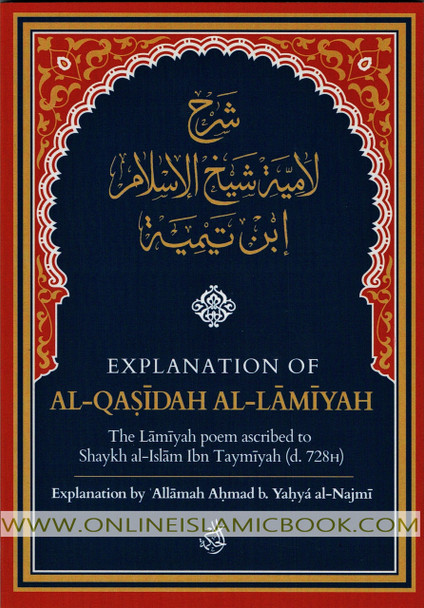 This is a translation of Shaykh Aḥmad al-Najmī’s explanation of al-Qāṣīdah al-Lāmīyah, which is ascribed to Shaykh al-Islām Ibn Taymīyah. It comprises of only 16 verses of poetry, clarifying a number of core beliefs of Ahl al-Sunnah Wa al-Jamāʿah. Thus, it is easy to memorize, and a great starting point for a child or a beginner in knowledge. This poem has a written manuscript in Jāmiʿah Malik Saud (no. 6/1928), and it is found alongside two other works, al-Wasīyah al-Kubra and al-Adillah al-Bayyinah, both of which are known works of Ibn Taymīyah. It has been mentioned by the Scholar of Iraq, Nʿumān al-Ālūsī, in his excellent book Jalā al-ʿAynayn Lī Muhākamah al-Aḥmadayn, and Shaykh ʿAbd al-Salām b. Burjis mentioned this poem as being amongst the poetry of Ibn Taymīyah in his work al-Ṣaḥīḥ Min al-Naẓm al-Faṣīḥ Lī Shaykh al-Islām Ibn Taymīyah; and a number of Scholars have explanations of this poem, from them is Shaykh Ahmad al-Mardawī (d. 1236H) written almost two hundred years ago, Shaykh al-Islām Ibn Taymīyah (V) said: “As for Ahl al-Sunnah Wa al-Ḥadīth, then it is not known that any of their scholars nor righteous common-folk ever renounced their doctrine and creed. Rather, they were the most patient of the people upon that, even if they were tested with all types of tests and trialed with all types of tribulations.” Naqḍ al-Manṭiq, p. 42.

Price:
Sale Price: $15.95
Was:
The Precise Verdicts Regarding the Deviant Methodologies By Shaykh Ahmad Al Najmi ISBN: 9781939833013 I have read these questions and answers that specifically address the call of these...
12056

Price:
Sale Price: $8.00
Was:
Explanation Of The Supplications For The Sick & Afflicted By Shaykh Abd Al-Razzaq Ibn Abd Al Muhsin Al-Abbad Product Description:   The author highlights in this extremely beneficial...
12473