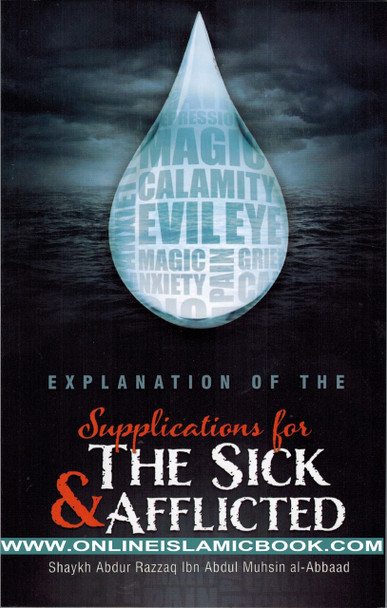 Price:
Sale Price: $8.00
Was:
— You save
Frequently bought together:

The author highlights in this extremely beneficial book a number of ways, derived from the texts of the Quran and the authentic Sunnah, to treat the evil eye, magic, depression, anxiety, pain, sickness and other common ailments. This should be of no surprise to the Muslim as the Prophet (saw) said: "Allah has not sent down an illness, except that he also sent down its cure. " Bukhari Ibn Al-Qayyim (ra) said: " The intent is to speak regarding these two Soorahs [ Al-Falaq and An-Naas] and to clarify the greatness of their benefit and the extreme need for them; rather, the necessity of them, and the fact that no one at all can do without them. Similarly, [ to clarify ] the fact that they have a great effect, specifically on the repelling of magic, the evil eye and the other manifestations of evils. And [ to clarify ] the fact that the servant's need for seeking refuge with these two Soorahs is greater than his need for air, food, drink, and clothing. " (Badaa'i Al-Fawaa'id by Ibn Al-Qayyim 199/2) Ibn Al-Qayyim (ra) said: "this remedy had an effect upon this disease and it removed it to the point that it was as if it never existed. It is the easiest and most convenient [ form of ] treatment. If the slave were to properly treat the ailment with Al-Faatihah, he would see an amazing effect in terms of [ recovery ] and healing. I had stayed in Makkah for a period of time and some illness had afficted me. I was not able to find a doctor or any medicine. So I would treat myself with Al-Faatihah, and I saw that it has an amazing effect. I would mention that to those who had complained of pain and many of them were healed quickly (by way of it)." (Al-Jawaab Al-Kaafee p.5)

Authentic supplications of the Prophet By Waleed K. S. Al-Essa

A Daar of Islamic Heritage

Price:
Sale Price: $15.95
Was:
Children's Supplications (English and Arabic) By Nawwaaf Ibn Suhail As-Samaaeel What are supplications? What is the significance of Quranic supplications? Islam has taught us how to supplicate to...
13492

Price:
Sale Price: $14.95
Was:
Ad-Du'a al-Mustajab: The Accepted Supplications By Shaikh Qasim Ar-Rifa'i A compendium of some 1227 hadiths on prayers and dhikrs of the prophetic sunnah About Imam al-Nawawi Imam Muhyi ddin Abi...
12555