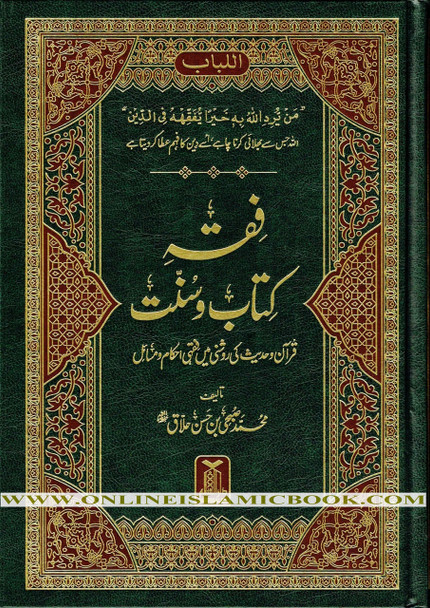 This is the Urdu translation for the book, 'Al-Lubab Fee Fiqh As-Sunnah Wal-Kitab,' which contains all of the books of Islamic Fiqh and its chapters, accompanied by evidence and is presented in a clear and simple manner, in order that they may be understood by the young and the old, without blindly following any of the schools of Jurisprudence, but rather being subject to authentic proofs and following the most authoritative opinions, without fanatical adherence to any particular group. Rather the author agrees with each group when the truth is with them and contradicts them when they veer from that which is correct.

Fiqh is to achieve access to knowledge of that which is unclear through knowledge of that which is proven, so it is more specific than mere knowledge or learning. And fiqh is knowledge of the juristic law. It is said Faquha -A man has acquired understanding and so he has become a Faqeeh (A scholar of Islamic Jurisprudence); and it is said Faqiha - He has understood it, i.e he has attained understanding of it, and it is said Tafaqqaha - he has devoted himself to the acquisition of (Islamic) Knowledge and specialized in it. Fiqh has been a subject of contention among the scholars as well as layman throughout the history of Islam

Fiqh According to the Qur'an & Sunnah (Vol. 1) By Muhammad Subhi bin Hasan Hallaq

The Prophet Muhammad for Children By Tajwar hassan