From the Signposts of Tawheed 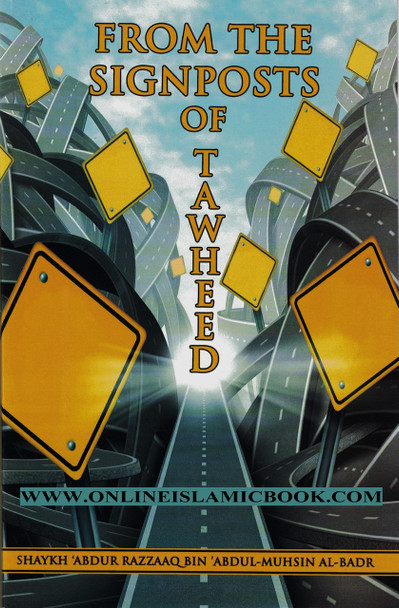 From the Signposts of Tawheed

Excerpt from the book:

Indeed Tawheed is the beginning of the religion and its end; its inner core and outer shell; and it is the beginning and end of the call of the messengers. It is the meaning of the statement: None has the right to be worshiped except Allaah. Due to it the creation was created, the messengers were sent, and the books were revealed. By way of it the people are divided into believers and disbelievers; blessed people of paradise and wretched people of the fire. It is the first obligation upon the responsible person and it is the reality of the religion of Al-Islaam besides which Allaah will not accept any other religion. Therefore, its affair is of the utmost importance and it is very great. Each of us is in need of being reminded of it and enlightened regarding it.

MSRP:
Now: $7.95
Was:
Proofs of Tawheed Tawheed is on of the most fundementa aspects of a humans life as this will shape his or her out look forever.
11688

The Fundamentals of Tawheed

MSRP:
Now: $12.95
Was:
This book presents a detailed explanation of the classical Islamic concept of God's unity as it relates to faith and acts of religious devotion. It also discusses the major areas within which the...
10839

MSRP:
Now: $9.95
Was:
Tawheed is the most important of all Islaamic sciences because mastering it means perfecting the necessary basic Islaamic knowledge upon which the reward for good deeds depends, i.e. if Tawheed is...
10847

MSRP:
Now: $19.95
Was:
Probably this is the most read book of today on Islamic belief regarding monotheism. It is a book authored on clarifying the reality of Monotheism and the different types of polytheistic beliefs and...
12719

The Fundamentals of Tawheed

MSRP:
Now: $12.95
Was:
This book presents a detailed explanation of the classical Islamic concept of God's unity as it relates to faith and acts of religious devotion. It also discusses the major areas within which the...
10839

From Somalia with Love By Naima B Robert

MSRP:
Now: $7.95
Was:
Safia Dirie is a teenage girl living in East London with her mother, Hoyo, and two older brothers, Ahmed and Abdullahi. Though she was born in Somalia, she doesn’t really remember it —...
11206

From the Best of Mankind

From MTV to Mecca: How Islam Inspired My Life

MSRP:
Now: $19.95
Was:
Kristiane Backer was one of the very first presenters on MTV Europe. She gained a cult following and became a darling of the European press, but something was missing from her life. A fateful...
11242