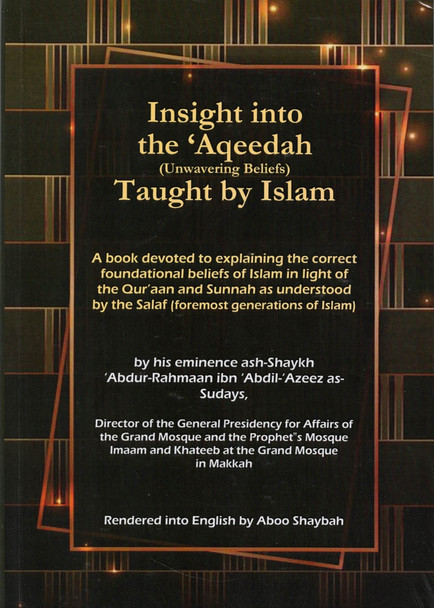 The most crucial issue that must be given attention by scholars of Islam, callers to Islam, scholars of Fiqh, preachers, individuals who strive for reform, and individuals in positions that allow them to disseminate ideas is the very same issue which was given attention by Allaah’s Prophets and Messengers, as well as all the righteous individuals who followed their path. By unanimous consensus, it is the absolutely most important issue there is. It forms the foundation of Islam. It is why Allaah sent His Messengers and revealed His scriptures. It is the basis for allegiance and disavowal, giving and withholding, liking and disliking. It is the reason for which people will end up in two groups. One group will be admitted to Jannah, and it is comprised of the people of sound beliefs and righteous deeds who sincerely devoted all worship to Allaah alone. The other group will be condemned to the hellfire, and it is comprised of the people who defiantly persisted in rejecting the truth from Allaah and worshipping others besides Him.Dear readers, the issue being referred to is that of having the correct ‘Aqeedah (unwavering beliefs) regarding Allaah, the Lord of all creation, as well as remaining steadfast in holding those beliefs and nurturing certainty about them. Al-Imaam ibn al-Qayyim (may Allaah have mercy upon him) said, “The right of Allaah we must fulfil is to worship Him in the way that He prescribed, not based on our own inclinations. Doing the latter is, in fact, incited by shaytaan. We are also to devote all our worship to Allaah alone, and none besides Him. Those two comprise the means to salvation, and they are the best means there could be.” “None will be saved from Allaah‟s wrath and the hellfire He prepared except for the people who comply with those two foundational principles. A person who does not comply either worships other than Allaah, or engages in practices that are invented and claimed to be part of Islam; and perhaps the person may even be doing both at the same time.” Thus, you must make all your intentions and deeds sincerely for Allaah alone. You must also follow the path of His Messenger, that being the path which is correct and comprised of sound beliefs and righteous deeds.”The sound ‘Aqeedah that a Muslim holds is the most precious thing he has. By it, he is able to face the most difficult of challenges and persevere through the most bitter of trials. By it, he himself becomes a protective shield that defends those behind it against the forces of falsehood, misguidance, and superstitions. Thus, maintaining the correct ‘Aqeedah is a necessity that must not be compromised, regardless of how circumstances may change. No matter how much opponents may scheme, Islam‟s foundations are not to be compromised. How could it be otherwise when those very foundational beliefs are the source of prominence and honour for our Ummah, as well as support against opponents? Allaah Himself stated that supporting the people of Eemaan (i.e. those who have sound beliefs and perform righteous deeds) is a duty that He will always fulfil towards them.

The Religion of Truth By Abdur Rahman Bin Hammad Al-Omar

MSRP:
Now: $11.95
Was
The Stability of the Aqeedah of the Salaf & Its Safety From Alteration By Abdur Razzaaq Bin Abdul Muhsin Al-Badr ISBN: 9781943281107 The pure unadulterated Islāmic ʿAqīdah is extracted from the...
13187

The Religion of Truth By Abdur Rahman Bin Hammad Al-Omar