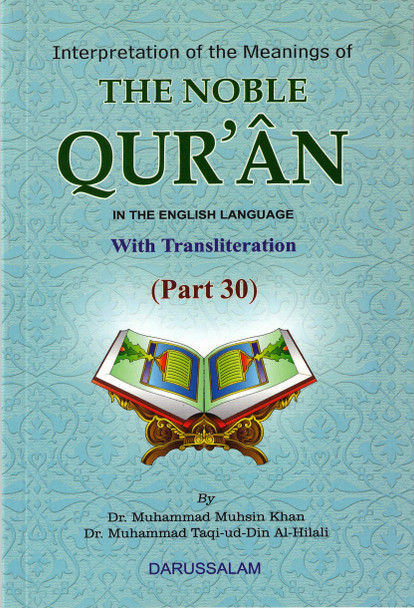 Please note: This is not Full Quran it is only 30th Part of Quran.

Interpretation of the meanings of the Noble Quran with in The English language With Transliteration (30th Part Only),9789960892573,

The reading or the Quran is of prime importance to a Muslim. The Quran was revealed in the Arabic language and it should also be read in Arabic only, because the actual meaning of the Quran in Arabic cannot be expressed in the translation of any language. That is why, it is an established fact that the reading of the any translation of the Quran does not mean that the actual Quran has been recited. But the Muslim who cannot read Arabic, are unable to get benefit by reciting the Quran in its language. Te ease them from this difficulty, through transliteration, an easy approach has been presented to recite the Quran. We have prepared this part of the Quran first which is in fact the last part of the Quran and contains small chapters (Surah).

The Noble Quran English Translation Of The Meanings And Commentary

The Noble Quran A New Rendering of its Meaning in English

MSRP:
Now: $29.95
Was:
The Noble Qur'an: A New Rendering of its Meaning in English needs no introduction. Now in its third edition, its reviews speak for themselves:"This new translation of the Qur'an immediately outdates...
10421

MSRP:
Now: $4.95
Was:
This work is the third in the series to help English-speaking Muslims learn how to recite the surahs of the Qur'an. This volume covers the surahs of the 28th part. The text is transliterated in an...
11807

The Noble Quran, Transliteration in Roman Script with Arabic Text and English

MSRP:
Now: $34.95
Was:
The Noble Quran, Transliteration in Roman Script with Arabic Text and English To read the Arabic text of the Qur'anic Verses in their correct form is of prime importance to every Muslim, as the...
10287

MSRP:
Now: $19.95
Was:
This is a nice hardbound edition of the popular three column format Qur'an with Arabic Text, translation of Abdullah Yusuf Ali and transliteration by M.A.H. Eliyasee.
11235

MSRP:
Now: $21.95
Was:
This is a nice hardbound edition of the popular three column format Qur'an i Green and white color,with Arabic Text, translation of Abdullah Yusuf Ali and transliteration by M.A.H. Eliyasee.
13096