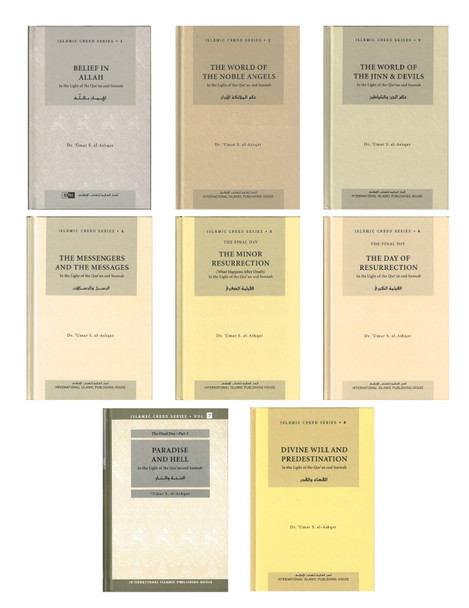 This package includes all 8 volumes of the Islamic Creed Series. These deeply written books explain, thoroughly, all the creeds and fundamentals of Islam, like the beliefs, the unseen creations, and the hereafter. They are written in an easy-to-understand method, and cover all of the creeds that are essential to being a Muslim.

Book #1: Belief in Allah. Belief in Allah is the most important aspect of being a Muslim. It is a fundamental belief in Islam. But many Muslims have allowed, through different philosophies and mythologies, for distorted concepts of Allah to creep into their minds. Al-Ashqar discusses these concepts, affirms the Oneness of Allah, and proves the theory of evolution wrong in the first part of the Islamic Creed Series.

Book #2: The World of the Noble Angels. We all know that angels exist. But who are they? What are they? And what role do they play in our society? ISBN:

Book #3: The World of Jinns and Devils. There are creatures beyond humans, different from humans. In their creation, in their attributes, and even in their traits. The Jinns are a small portion of these creatures.

Book #4: The Messengers and the Messages. Messengers are humans, just like us, sent from Allah to help us be better people and to guide us to the straight path. Belief in all the messengers is an important part of being a Mu'min, or believer.

Book #5: The Minor Resurrection. What happens after death? When will our world end? What are the signs? These are questions roaming around so many peoples' minds. The answer to these are in his book, directly produced from the Qur'an and the Sunnah.

Book #6: The Day of Resurrection. We all know that this is a subject that is vital to every believing men and women. This book talks about it, and for this reason, deserves to be on every Muslim's bookshelf.

Book #7: Islamic Creed Series is Paradise and Hell. The only two places that Allah will have the option to welcome us into in the Hereafter. Obviously, this subject is important. Because nothing is more important to a true Muslim than attaining Paradise and avoiding Hell.

Book #8: Divine Will and Predestination. This concept is the last pillar of faith. Because Muslims believe in predestination, does this mean that they are hopeless fatalists, surrendering to the claws of fate? In this book, Al-Ashqar explains fate in great depth and details.

Dr. ‘Umar Sulaymân al-Ashqar is a professor in the Faculty of Islamic Law at the University of Jordan. He was previously the Dean of the Faculty of Islamic Law at al-Zarqa’ University, also in Jordan. Dr. al-Ashqar was born in Palestine in 1940. His family later moved to Madinah, Saudi Arabia, and he attended the Islamic University of Madinah, where he completed his bachelor’s degree. He received his master’s and doctorate degrees from al-Azhar Univeristy in Cairo, and he was a student of several eminent scholars such as Shaykh ibn Bâz and Shaykh al-Albâni. Dr. al-Ashqar is the author of numerous books on Islam, including the Islamic Creed Series.