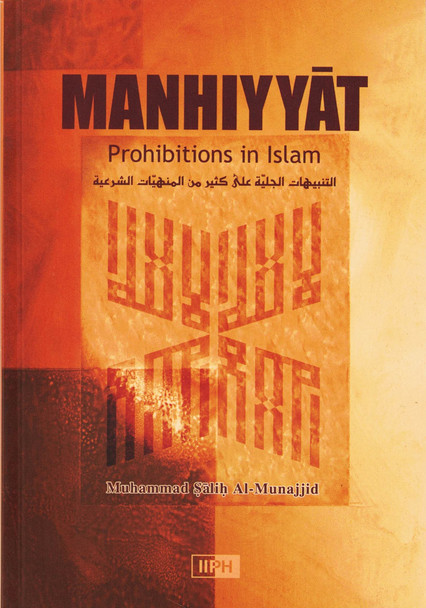 Allah has decreed in His book, the Qur'an, and in the Sunnah of His prophet (sws) what is allowed and what is prohibited. Every Muslim is therefore commanded to learn his religion in general and these prohibitions in particular. The main purpose behind these prohibitions is to promote good virtues and eradicate evil and malicious deeds. In Manhiyyat: Prohibitions in Islam, author Muhammad Salih AlMunajjid discusses the prohibitions in Islam and analyzes ways to avoid them. He also explains the varying degrees of prohibitions within Islam such as haram (forbidden) and makrooh (disliked). This is a good read for anyone.

As much as there are many things that we are allowed and given the privilege to do in Islam, there are also those forbidden things that we must watch out for. It is better to know them than to be hurt later on by them, isn't it? This book will explain in thorough detail the things that Allah marked as taboo for us, in the guiding light of the Qur'aan and Sunnah.
View AllClose

Interactions of the Greatest Leader By Muhammad Saalih Al-Munajjid

MSRP:
Now: $4.95
Was:
Celebrating Valentine's Day By Muhammad Salih al-Munajjid Due to the pitiful state which the Ummah of Muhammad (Peace be upon him) is in; the lack of knowledge of Muslims about their; and the high...
12206

MSRP: $17.95
Now: $15.95
Was: $17.95
The Epidemic of Computer Games by Muhammad Saalih Al- Munajjid The author wrote about this problem, "Researchers and educators who are emphasized in this field have been warning against the...
13719

MSRP: $25.95
Now: $21.95
Was: $25.95
The Meanings Of Supplications By Muhammad Saalih al Munajjid This is a brief, summarized, and short booklet regarding the meanings of the legislated supplications, chosen from the Prophetic Hadeeth,...
13723

Paradise: Its Blessings and How to Get There By Ali Hasan 'Ali 'Abdul-Hamid

The Benevolence Of Islam by Shaikh Salim Al-Hilali

MSRP:
Now: $6.95
Was:
Towards Understanding Islam By Sayyid Abul A'La Maududi FOREWORD The present edition of TOWARDS UNDERSTANDING ISLAM is not only a new translation of my book Risala-e-Diniyat but is also an entirely...
14345