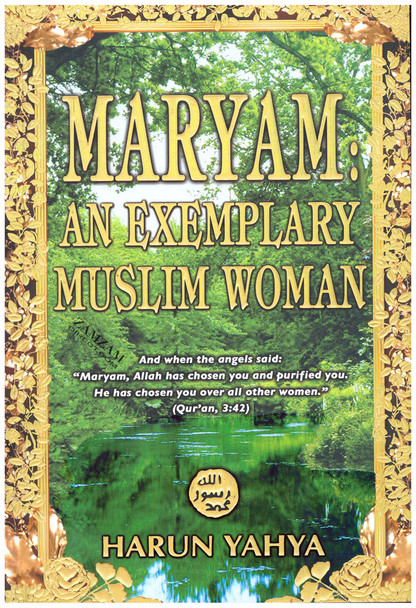 Allah made it possible for people to understand how to live the Qur'an's morality by giving examples from the Prophets' and other Muslims' lives. One of these sincere Muslims is Maryam, one of the two women noted for their exemplary characters: "Allah has made an example for those who believe: the wife of Pharaoh, when she said: 'My Lord, build a house in the Garden for me in Your presence, rescue me from Pharaoh and his deeds, and rescue me from this wrongdoing people.' And Maryam, the daughter of 'Imran, who guarded her chastity-We breathed Our Spirit into her. She confirmed the Words of her Lord and His Book, and was one of the obedient". (Surat at-Tahrim: 11-12) Allah introduces Maryam as having "the ideal Muslim woman's character." This character is completely different than the common character of women in today's unbelieving societies, where they usually share a common socially acceptable character handed down from their ancestors. According to the Qur'an, however, men and women have the same responsibilities and characters, for Allah refers to "an ideal Muslim character."

Price:
Sale Price: $4.95
Was:
Sincere Repentance By Abu Maryam Majdi Fathi ISBN: 9781874263256 Immediate repentance from all types of sins is necessary'Except those who repent, believe and do good deeds: (for) those ALLAH...
10784

The Wise King and The Story of Maryam By Saniyasnain Khan

Price:
Sale Price: $3.95
Was:
The Wise King and The Story of Maryam By Saniyasnain Khan ISBN: 9788178983214 Goodword’s Favourite Tales from the Quran are timeless, treasured stories, specially chosen for young...
11622