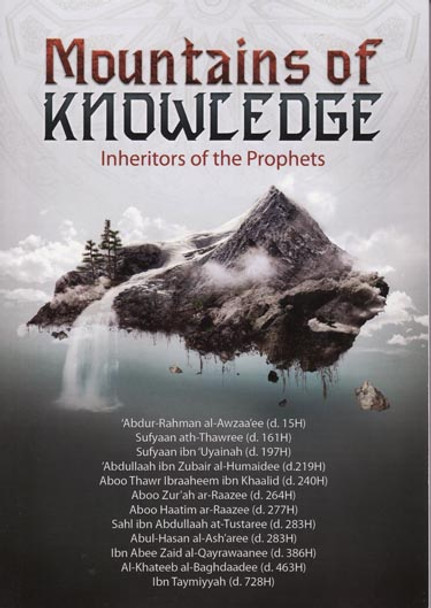 Mountains of Knowledge Inheritors of the Prophets Third Edition 2013 - From The Publishers. - With the aim of actualizing the statement of the revered Imaam Malik ibn Anas Died 179H. - "The latter part of the Ummah will not be corrected except by that which corrected its first part", This is a presentation of the Creed Methodology of the early generations known as the Salaf As-Saalih, as preserved in some extent manuscripts and documents that have been verified by early and latter day scholars of the Sunnah. - It is not hidden from any and every Muslim, the eelier one goes back in history, the purer and cleaner the religion becomes, until we reach the era of the companions of Allah's messenger peace and blessing of Allah be upon him. - It was to these noble and virtues people to he said "I have left you upon clear proof, its night is like its day, no one deviates from it except that he is destroyed. Whomsoever amongst you lives long will see great differing, so stick to what you know of my Sunnah and the sunnah of the rightly guided Khalifahs. Cling to that with your molar teeth." - For this reason we find some of the successors to the companions advising those in their times to stick to the original state of affairs, as it was in the era of the companions, for it is through that Methodology alone that the Muslims will be united and their strength and glory realized. - Abdur Rahman Al Awzaaee d.15 Hijriah - Sufyaan Ath Thawree d.161h - Sufyaan ibn Uyainah d.197h - Abdullaah ibn Zubait Al Humaidee d.219h

Prophet Muhammad as a Teacher By Dr. S. Dawood Shah

The Hadith of the ifk By Abu Talha Dawud Burbank

MSRP:
Now: $119.95
Was:
Sunan Abu Dawood Urdu (4 Vol. Set) By Imam Abu Dawood Sulaiman bin Ashath Sajistani This book of hadith is one from the group of six renowned books of hadith known as Siha Sittah. Rest of the books...
13484

MSRP:
Now: $6.95
Was:
Muslim Unification at Time of Crises By Shaykh Abdul-Muhsin al-Abbad There is no doubt that it is obligatory upon Ahlul-Sunnah in every time and place to unify and be merciful to each other, and to...
11699

MSRP:
Now: $119.95
Was:
Sunan Abu Dawood Urdu (4 Vol. Set) By Imam Abu Dawood Sulaiman bin Ashath Sajistani This book of hadith is one from the group of six renowned books of hadith known as Siha Sittah. Rest of the books...
13484