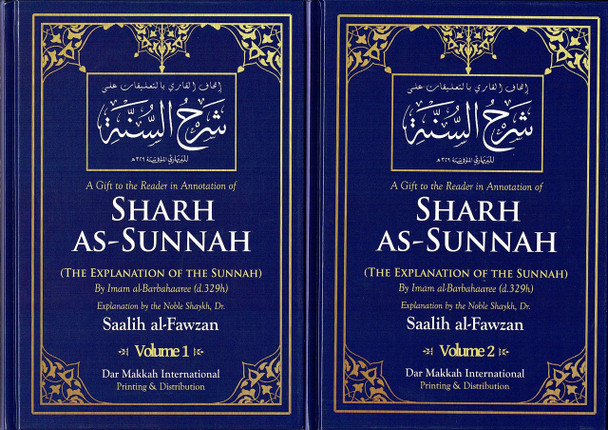 A Gift to the Reader in Annotation of Sharh as-Sunnah,The Explanation of the Sunnah by Imam Al-Barbahaaree (d.329h) (2 Vol Set) Explained By Shaykh Saalih Al-Fawzaan

This is the highly beneficial two volume work in explanation of the famous works by Imam al-Barbahari (d.329h) by the esteemed & noble Shaykh, Dr Saalih al- Fawzan. Its importance can be seen by virtue of its being compiled in the early times; as it is one of the books of the earliest Salaf - those who lived in the same period with the great Imams, acquired knowledge from them and reported their pure Aqidah(creed)

Imaam Al-Barbahaaree, rahimahullaah was a formidable and imposing Imaam of the 4th centuty Hijri who spoke out with the truth and called to the Sunnah and to the following of narrations. He also had renown and the respect of the ruler. In his gatherings, various circles for the study of hadeeth, the narrations and Fiqh were held. These were attended by many of the scholars of hadeeth and fiqh. The scholar, Abu 'Abdillaah said: "If you see a person of Baghdaad loving Abul-Hasan Ibn Bashshaar and Abu Muhammad Al-Barbahaaree, then know that he is a person of the Sunnah." The Imam Died in 329 Hijri.

Foundation of the Sunnah By Imaam Ahmad Bin Hanbal