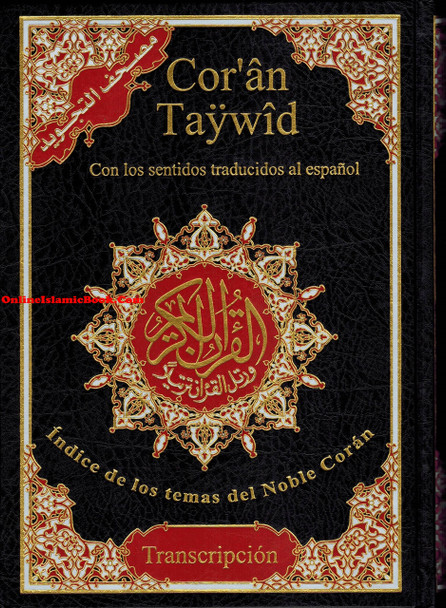 This complete Colour Coded Tajweed Quran comes with a nice and beautiful hard cover, it includes translations and transliteration into Spanish.

Translation: Meanings of the Quranic versus are translated into Spanish and placed on the margins around the Arabic text.

Transliteration: Arabic letters are presented by Spanish letters with added symbols in order to give the same sound of Arabic letters.

Spanish transliteration makes it easier for the speakers of the Spanish language to read the Tajweed Quran in Arabic pronunciation using the Spanish alphabet letters.

This Tajweed Quran is in Hafs narration.

All our Tajweed Quran products - including this Quran-- come with the following:

Tajweed Quran with Translation In English By Abdullah Yusuf Ali

Price:
Sale Price: $49.95
Was:
Tajweed Quran with Translation In English By Abdullah Yusuf Ali ISBN: 9789933423001 PLEASE NOT: TITLE COLOR OF QURAN DEPEND ON AVAILABILITY Description From Publisher This complete...
10316