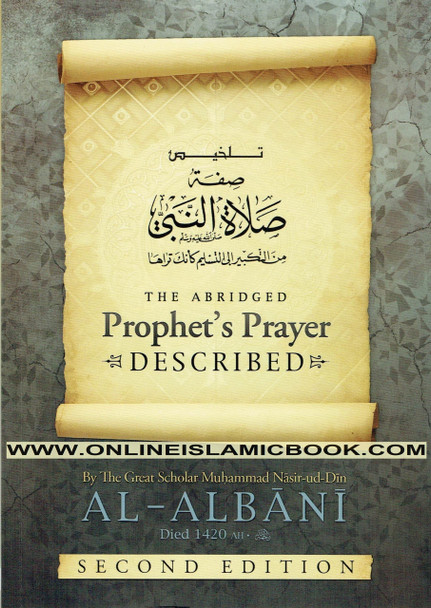 Shaikh al-AlbсnÑä, may Allсh have mercy upon him, said, “It was suggested to me that I should undertake an abridgement of my book, “Description of the Prophet’s Prayer from the Takbir to the Taslim as if you were seeing it” and that I should shorten it and rephrase it for it to be more accessible to the common people.

So, I found this to be a favorable suggestion, and it agreed with what I myself had felt for a long time. I had also frequently heard such advice from brothers and friends. So this encouraged me to allocate to it a small part of my time which is crowded with knowledge-related work and research. So I hastened, as far as my ability and efforts allowed, to carry out the suggestion, whilst asking the Guardian-Lord, the One free of all imperfections and the Most High, that He should make it an action done purely and sincerely for His Face, and that He should cause it to be of benefit to my brother Muslims.

In it I quoted some extra points of benefit additional to what is to be found in Sifatus-Salat. These were matters that came to my attention and I thought that it would be appropriate to mention them in the abridgement.

I also gave attention to explaining some phrases occurring in some of the narrations and the adhkar (words of remembrance of Allah). I also provided major headings for each section, and also sub-headings for further clarification. Under these I quoted the points under discussion, numbered consecutively. Alongside each issue I quoted the ruling: whether it is a pillar (rukn) or an obligation (wajib). As for those matters about which I remained silent and did not mention a ruling, then they are from the Sunnah, and some of them carry the possibility of being declared obligatory. However, stating one or the other with certainty would conflict with what is befitting from scholarly research …”

MSRP:
Now: $7.95
Was:
Praying Eed in the Musallaa is the Sunnah By Imaam Naasir ud-Deen al-Albaanee This book is a complete translation of the booklet Salaat-ul-aEidayn fil-Musallaa hiya as-Sunnah (Praying æEid in the...
11013

MSRP:
Now: $11.95
Was:
The Hijaab (Jilbaab) of the Muslim Woman in the Quran and Sunnah By Al-Imaam Muhammad Naasir-ud-Deen al-Albaanee The Prophet (PBUH) said,
11742