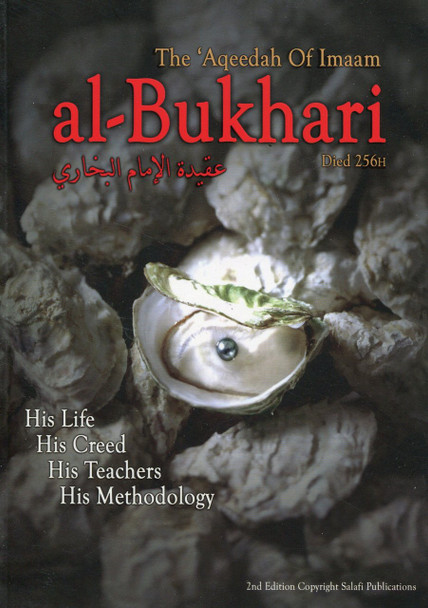 Before you, O reader, may Allaah guide you to His pleasure, is a compilation of the Creed and Methodology of the great Imaam and Scholar of the Prophetic Traditions and the Religion, Al-Bukhaaree, may Allaah have Mercy upon him. Imaam Al-Bukhaaree is the author of the famous work of Hadeeth (Prophetic Tradition) known as 'Saheeh Al-Bukhaaree'. This work is considered by the scholars of Orthodox Islaam to be the most authentic book after the Qur'aan. When Imaam Al-Bukhaaree speaks, the Ummah pays attention, since he is from the most knowledgeable of the people of the earth regarding the way of the Messenger Muhammad (salallaahu 'alayhi wassallam). Imaam Al-Bukhaaree states that he spent over forty-six years travelling around the various Islaamic lands, benefiting from the scholars of his time. He met over a thousand scholars, and took knowledge from and imparted knowledge to them. So after he mentions many of the places he visited and the names of the scholars he met, he states, "And we are content with the naming of these people so that this discourse may be brief and concise and is not lengthened. And I never sa w a single one amongst them differ with respect to the following matters..". Imaam Al-Bukhaaree then proceeds to state and explain the matters of Faith and Methodology of the Salaf (Righteous Predecessors) of this Muslim nation. This book is a translation of that treatise narrated from Imaam Al-Bukhaaree contained in the encyclopedia of the 'Aqeedah known as "Sharh Usool I'tiqaad Ahlus-Sunnah Wal-Jamaa'ah" (Explanation Of The Fundamentals Of The Creed Of Ahlus-Sunnah Wal-Jamaa'ah) of Imaam Al-Laalikaa'ee (Died 418 AH). So this book, O Muslim, is a translation of some of the points of the Creed of Ahlus-Sunnah Wal-Jamaa'ah. The text is as relevant today as it was over one thousand years ago, if not more so, since confusion regarding matters of Manhaj and 'Aqeedah (Methodology and Creed) has increased. So know that success lies in sticking to the way of the Salaf as Imaam Maalik Bin Anas (Died 179 AH) said, "The latter part of this Ummah will not be rectified except by that which rectified its earliest part". So compare the speech of Imaam Al-Bukhaaree contained in this treatise to the speech of the callers to Islaam today, and you will see who in reality is in accordance to Islaam as it was understood by the earliest generations.

Muhammad ( PBUH ) his Life, his Miracles with his Companions By Dr. Mustafa Mahmoud

The Meaning of Islam: A Brief Explanation of the Most Important Principles & Teachings By Abu Iyad Amjad bin Muhammad Rafiq

Price:
Sale Price: $24.95
Was:
Sharh Al-aqeedah Al-wasitiyah (Arabic Only) By Ibn Taymiyyahs Sheikh-ul-Islam's book Al-Aqeedah-il-Wasitiyah deals with the perfect and undefiled Islamic Faith and Creed of the As-Salaf-As-Salih (the...
11280

Price:
Sale Price: $29.95
Was:
Al Adab Al Mufrad by Imam Bukhari By Imam Bukhari ISBN: 9781872531180 "A unique and comprehensive volume pact with empowering Islamic examples of personal development in every aspect of daily...
10919