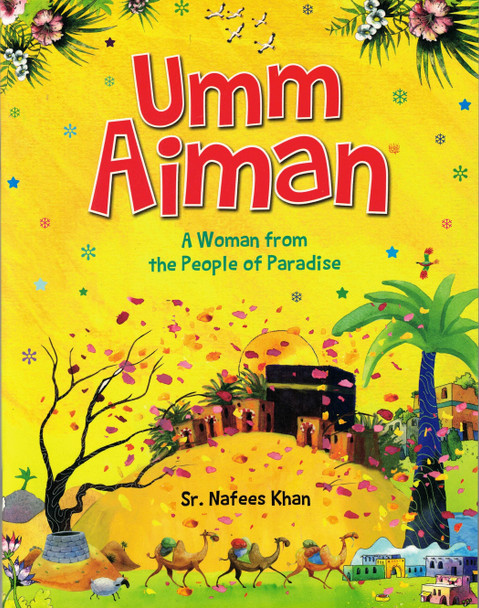 Umm Aiman, another book in the series about the companions of the Prophet Muhammad, is a delightfully written exploration of the life of Umm Aiman, an Abyssinian slave who worked as a maid in the house of Aminah, the Prophet’s mother. The Prophet revered her as a mother, because she looked after him and raised him after his mother’s death. The main focus is on her life in Makkah – first as a slave and then as a freed woman, how she became a Muslim, her marriage, motherhood, her migration to Madinah and her belief in the Prophet and his mission. She endured hardships bravely and played a significant role in spreading the message of Islam. The colourful illustrations that accompany the stories will make this an enjoyable read for children as well as adults, and will help them learn about and appreciate the life of Umm Aiman.

Ruquayyah and Umm Kulthum: The Daughters of the Prophet Muhammad (Arabic Landuage) By Sr. Nafees Khan

The Daughters of The Prophet Muhammad (Paperback) By Sr. Nafees Khan

Price:
Sale Price: $9.95
Was:
Wives of People of Paradise Houris and Humans By Shaykh Allamah Abu Ibrahim Muhammad ibn Abdul Wahhab Al-Wasabi This is the humble approach in which I have collected what I am able to compile of the...
12886

Waiting for Baby By Umm Uthmaan

Price:
Sale Price: $9.95
Was:
Waiting for Baby By Umm Uthmaan ISBN: 9780955386800 A touching yet educational account of two children’s long wait for their baby sibling to arriveIntroduces typical scenarios of Mummy...
10008

My Ramadan Workbook By Umm Zakariyya

Price:
Sale Price: $16.95
Was:
My Ramadan Workbook By Umm Zakariyya Ramadan is the ninth month of the Islamic calendar and a special time of year for Muslims all around the world. It is a time of fasting, praying, giving, and...
13455

Price:
Sale Price: $7.95
Was:
A Well guarded Treasure By Iman Daglas ISBN: 9789960899916 This is an autobiography presented by Iman Daglas, an American woman who was Christian before, illustrating the ethical and moral...
10413