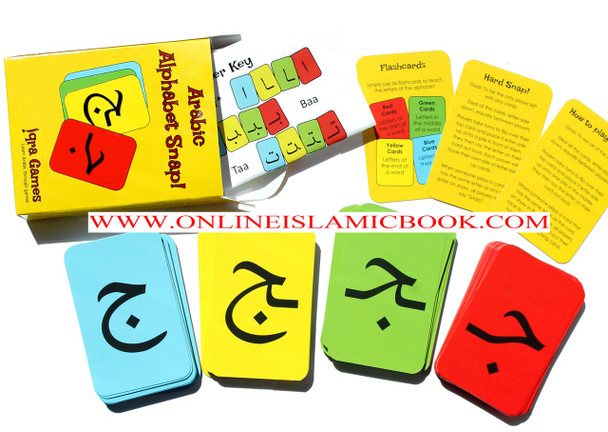 Made to be played in the style of a traditional snap game, these cards teach and reinforce the letters of the Arabic alphabet and their letter joins. The cards can also be used as flashcards in a teaching environment.In the box: Stand alone letters, letters at the beginning of a word, letters in the middle of a word and letters at the end of a word; rule cards with different games to play; an Arabic alphabet key sheet.

The Arabic alphabet card game that uses the letters in all their positions: beginning, middle, end and alone.

Three games in one:

Flashcard games to teach the letters
A snap game to build confidence with the letter joins
A fast paced and competitive family game for those confident with the letters
The game comes with a ‘cheat-sheet’ which shows each letter in all its formations along with the English transliteration for the letter names.112 game cards + 3 rule cards

These colour coded Arabic Alphabet Snap cards can also be used as flashcards to teach the letters of the Arabic alphabet in their various positions.
Red: letters at the start of a word
Green: letters in the middle of a word
Yellow: letters at the end of a word
Blue: letters on their own

How to play Snap

Goal: To win all of the cards.

Deal all the cards evenly, face-down between the players.
Players take turns to flip over their top card and place it letter-side-up onto a pile in the middle. They then say the letter on their card out loud.
When someone plays a card that has the same letter as the card on show in the middle, all players race to say ‘Snap!’ and put their hand on the matching cards.
The first hand on the pile wins the cards and adds them, face-down, to the bottom of their own cards.
The game continues until one player wins all the cards.
Note: if one card shows a letter as if it is starting a word and another shows the same letter in any other form, this is a snap.

You might want to choose a forfeit for saying the wrong letter name or saying ‘Snap!’ at the wrong time.

Price:
Sale Price: $9.95
Was:
Arabic Alphabet Flash Cards By Suzanne Elizabeth Kidd The flash cards are an excellent teaching resource to help children learn the Arabic alphabet and visualise where each letter is pronounced from.
11667

Price:
Sale Price: $3.99
Was:
Arabic Alphabet Flash Cards  ISBN: 9788178985558 Children have a tremendous capacity for expanding their knowledge, especially during their first six years. That's when they are...
11359

Price:
Sale Price: $19.95
Was:
Activity Flash Cards: Arabic Alphabet By Saniyasnain Khan ISBN: 9789386589125 Each letter can be traced and copied to allow children to master letter formation, as well as improving their pen...
12928

Price:
Sale Price: $9.95
Was:
Arabic Alphabet Flash Cards By Suzanne Elizabeth Kidd The flash cards are an excellent teaching resource to help children learn the Arabic alphabet and visualise where each letter is pronounced from.
11667