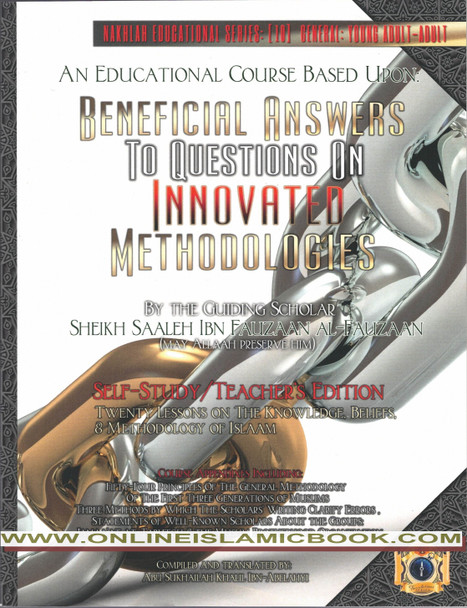 This course focuses upon the importance of clarity, in the midst of today’s confusion, in the way you understand and practice Islaam. What is the right way or methodology to do so? Examine the evidences and proofs from the sources texts of the Qur’aan and Sunnah and the statements of many scholars explaining them, that connect you directly to the Islaam which the Messenger of Allaah taught his Companions may Allaah be pleased with them all.
This course book includes:
Twenty Lessons On Knowledge, Beliefs, & Methodology with Quizzes, Review Questions & Lesson Benefits
Also in addition to four text based appendices there are eight course appendices Including:

A Lighthouse of Knowledge from a Guardian of The Sunnah: Sheikh Rabee Ibn Haadee Umair al Madkhalee By Abu Sukhailah Khalil Ibn-Abelahyi al-Amreekee

Price:
Sale Price: $12.00
Was:
Beneficial Answers to Questions On Innovated Methodologies [Exercise Workbook] By Sheikh Saaleh Ibn Fauzaan al-Fauzaan ISBN: 9781938117503 This exercise workbook is intended to be used in a...
12434

Price:
Sale Price: $8.99
Was:
Essential Questions and Answers on the Salafee Methodology By Shaykh Saalih ibn Fawzaan al-Fawzaan ISBN: 9781927012291 In this time of political turmoil and social upheavals, many sects claim to...
11441