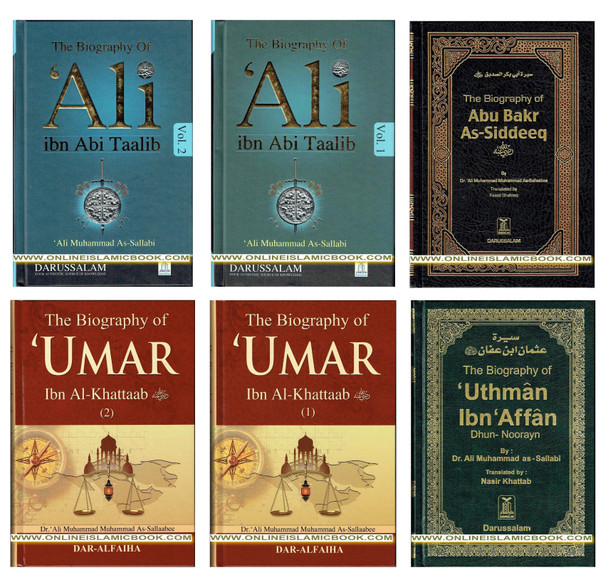 You will get Total 6 Books All books are Hardcover

Dr. Ali M. Sallabi is famous for his detailed books of history and biography that bring the past to life for modern readers. Dr. Sallabi was born in Libya in 1383 H/1963 CE, and earned a bachelor's degree at the Islamic University of Madinah, graduating first in his class. He completed his master's and doctorate degrees at Omdurman Islamic University in Sudan

Description From The Publisher

From the day he embraced Islam until the day he died, Abu Bakr As-Siddique أبو بكر الصديق (Radhi Allahu Anhu - May Allah be Pleased with Him) was the ideal Muslim, surpassing all other Companions in every sphere of life. During the Prophet's lifetime, Abu Bakr was an exemplary soldier on the battlefield; upon the Prophet's death, Abu Bakr (R) remained steadfast and, through the help of Allah, held this nation together. When others suggested keeping Usaamah's army back, Abu Bakr insisted - and correctly so - that the army should continue the mission which the Prophet (S) had in mind.

This book describes, among other things, the principles based upon which 'Umar ibn al-Khattaab (Radi Allah Anh) governed the Muslims during his caliphate; among those principles were mutual consultation, justice, equality among people, and honoring of freedoms.

With the turn of every page, the reader will come to appreciate the fact that 'Omar (R) was exceptional in his Faith, distinguished in his knowledge, profoundly wise in his thinking, remarkable in his eloquence, noble in his manners and great in the contributions he made to this Nation.

Usman ibn Affan was the fourth person to accept Islam upon invitation of Abu Bakr As Siddique. Thus he learned with the Prophet from the very beginning of Islam and faced much prosecution at the hands of his family and clansman. The Prophet (S) loved Usmaan so much so that he gave two of his daughters in marriage to him, earning him the title Dhun-Noorayn (carrier of 2 lights). Prophet said after the death of his second wife that if he had a third daughter he would have given her to Osman as well. The Prophet gave glad tidings of paradise to Othman saying that whatever he does after today will not harm him.

This is the fourth book in studying the reign of the Rightly Guided Caliphs. It relates the life of the Leader of the Believers, 'Ali, may Allah be pleased with him, from birth until his martyrdom.

The book relates with detail how he came to Islam and his most important actions in Makkah, his migration to Madinah, his life in Madinah, his campaigns and battles alongside the Messenger of Allah, his life during the era of Rightly Guided Caliphs and his swearing of allegiance and his period of Caliphate.