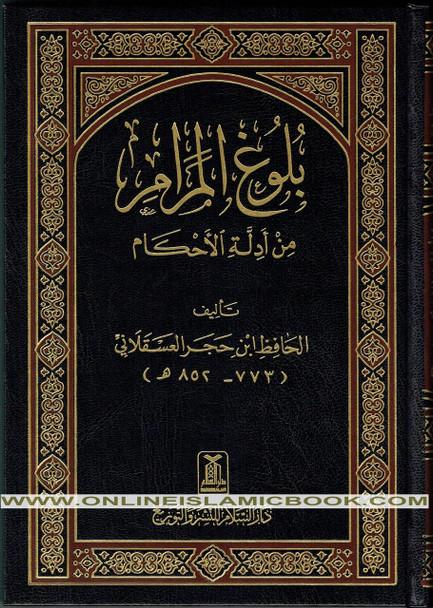 Attainment of the Objective (Arabic Language)

Bulugh Al-Maram (attainment of the objective according to the evidence of the ordinances) is based upon the Ahadith of our Prophet which have been the sources of Islamic Jurisprudence. Al-Hafiz Ibn Hajar Al-Asqalani has recorded the true significance of the Ahadith and their origins & also made a comparison of the versions, if the sources are more than one.

The book “Bulugh al-Maram min Adillat al-Ahkam” (Attainment of the Objective According to Evidences of the Ordinances) by Ibn Ḥajar al-ʿAsqalānī contains the basis of the Prophetic evidence for the legal rulings. Its author has edited it so thoroughly that whoever memorizes it among his peers can be distinguished, while the novice student can seek help from it, and even scholars cannot dispense with it, as he mentioned in his introduction. The total Hadiths of this book amounted to (1596) Hadiths.

Price:
Sale Price: $24.95
Was:
Al Tib Al Nabawi Arabic language (Medicine Of the Prophet in Arabic Language)By Ibn al-Qayyim (Dar Al Fayha) Healing with the Medicine of the Prophet is the panacea for those in search of good...
13084

Price:
Sale Price: $22.95
Was:
Bulugh Al-Maram  Hindi Language Bulugh Al-Maram is based upon the Ahadith of our Prophet which have been the sources of Islamic Jurisprudence. Al-Hafiz Ibn Hajar Al-Asqalani (Hijrah 777-853)...
13985

Price:
Sale Price: $249.95
Was:
Fathul Bari-Sharah Sahih Al-Bukhari ,Complete in 2 volumes, By Hafiz Ibn Hajar Al-Askalani  And the Healthiest books after the Book of Allah Almighty is the book of Sahih of Imam Bukhari as...
13095

Price:
Sale Price: $22.95
Was:
Mukhtasar Seerat ur Rasool, (Arabic Language) By Safi-ur-Rahman al-Mubarkpuri   Mukhtasar Seerat-ur-Rasool (large sized) is a wonderful book about the Sunnah of...
13092