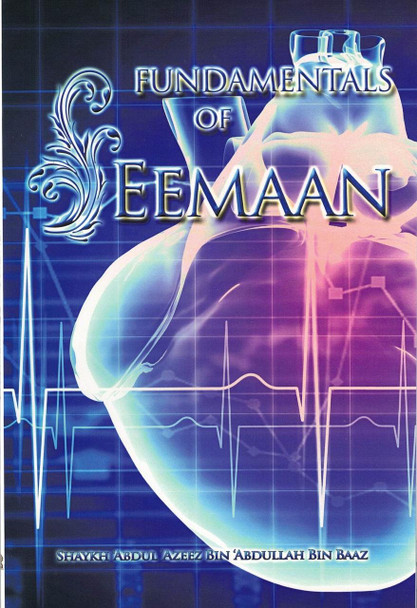 The Qur’aan has clarified these fundamentals ‎within many verses; likewise, our Prophet, ‎‎(sallallahu ‘alayhi wa sallam), has clarified ‎them within the authentic Sunnah. They are six ‎fundamentals, and they are the fundamentals of ‎Eemaan. They are the fundamentals of the ‎religion; for Eemaan is the entire religion, and it ‎is Islaam and the guidance. It is righteousness ‎and piety. It is that with which Allaah sent the ‎Messenger, (sallallahu ‘alayhi wa sallam), from ‎beneficial knowledge and righteous actions. All ‎of it is referred to as Eemaan.

These six ‎fundamentals of our religion have been clarified ‎by the Mighty Book within various places and ‎the trustworthy Messenger of Allaah (sallallahu ‎‎‘alayhi wa sallam) clarified them within the ‎Ahadeeth. From that which has come within the ‎Book of Allaah, the Mighty and Majestic, is His ‎statement:‎

‎ “It is not Al-Birr (piety, righteousness) ‎that you turn your faces towards east and ‎‎(or) west (in prayers); but Al-Birr is (the ‎quality of) the one who believes in Allaah, ‎the Last Day, the Angels, the Book, the ‎Prophets.” ‎
‎[Soorah Al-Baqarah 2:177]‎

Allaah, Glorified and Exalted be He, clarified ‎here five of the fundamentals of Eemaan. They ‎are:‎
Eemaan in Allaah
The Last Day
The Angels
The Book
The Prophets

The religion revolves around these five ‎fundamentals, inwardly and outwardly. Allaah, ‎the Majestic and High, has said:‎

‎ “The Messenger (Muhammad) believes in ‎what has been sent down to him from his ‎Lord, and (so do) the believers. Each one ‎believes in Allaah, His Angels, His Books, ‎and His Messengers. They say, “We make ‎no distinction between one another of ‎His Messengers.”
‎
‎[Soorah Al-Baqarah 2:285]‎

Price:
Sale Price: $8.95
Was:
Understanding The Etiquettes of Differing By Shaykh 'Abdul-'Azeez bin Baaz ISBN: 9781902570167 This book deals with the subject of differing, or ikhtilaaf, in a brief and comprehensive manner,...
11848

Price:
Sale Price: $9.95
Was:
The Ideological Attack By Shaykh 'Abdul-'Azaaz bin Baaz Ever since the beginning of Islaam, the unbelievers have never ceased plotting against this precious Muslim ummah (nation) in order to inject...
11895

Price:
Sale Price: $4.95
Was:
The Authentic Creed and Invalidators of Islam By Abdul Aziz bin Abdullah bin Baz,9789960899138, The most important matter for every Muslim is the correctness of his beliefs. Islam established on the...
10013

Price:
Sale Price: $5.00
Was:
Certain youth had the fortunate opportunity of being raised in the city of Al-Madinah during the lifetime of the Prophet Muhammad (S). They witnessed Islam grow from its first days and were instilled...
10611

The Delight of Faith By Abdullah bin Jarullah

Price:
Sale Price: $7.95
Was:
The purpose of this book is to present the most basic knowledge of Islamic Creed (Aqidah). This type of knowledge is never optional, because unless your creed is in accordance with the Noble Qur'an...
10040