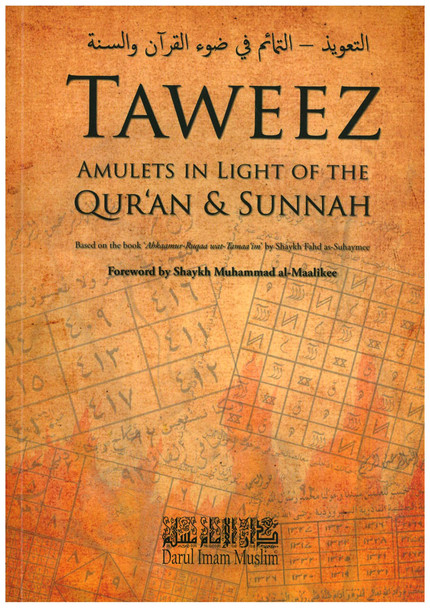 This book is an adaptation and summarization of the book "Ahkaamur-Ruqaa wat-Tamaa'im" (Rulings related to Ruqyah and Amulets) by Shaykh Fahd as-Suhaymee (a lecturer at the Islamic University, Madeenah) as well as other sources.

This book discusses the definition, history and Islamic ruling regarding wearing amulets in order to bring about good or prevent harm, and is accompanied by pictorial examples of widely used Taweez in the Muslim world.

In his foreword, Shaykh Muhammad al-Maalikee states: "I have been acquainted with what the noble brother Azhar Majothi has written which he titled æTaweezÆ, and I found it to be a valuable book in its subject, whereby he treated it with wisdom and clear and authentic convincing evidence. It is regarding a matter which is one of the most important matters in our modern day times, and it is connected to amulets and taweez; as it has spread wide throughout the Muslim world, and its reputation has reached a stage where it has become widespread between the nations; the noble brother has therefore exerted his capacity in investigating its realities, examining its details, and has brought that which was previously (written) and added to it what necessarily requires clarifying in regards to what is happening in this time..."

Fast According to Quran & Sunnah By Professor Muhammad Zulfiqar

The Jinn In The Quran and the Sunnah By Mustafa Ashour

Fortress Of The Muslim: Dua supplications from the Quran and Sunnah

Price:
Sale Price: $7.95
Was:
Raising Children in Light of the Quran and Sunnah By Abdus Salaam bin Abdillaah As Sulaymaan ISBN: 9780977752275 Although short in size, this book offers a wealth of beneficial advice and...
11900